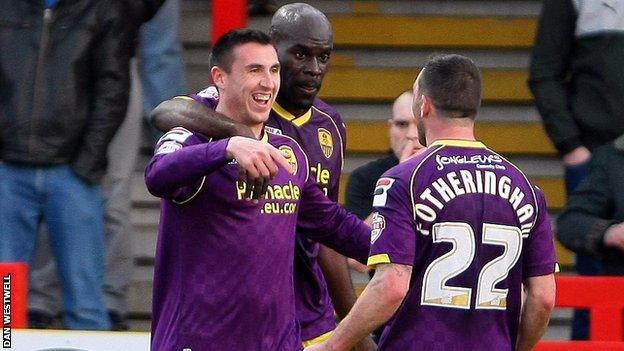 Shaun Derry's side took the lead just before the break when Ball drove home through a crowded penalty area.

County, who maintained their unbeaten start to 2014, are now two points above the bottom four.

"I don't think that, if you saw the game on chances and took their goal away, you would think it was an away win.

"It was a decent overall performance from us I thought. The lads picked up where they left off the other night showed a positive spirit, positive momentum and I think they deserved a lot more than they got today.

"The ball dropped to Fil [Morais] and he sliced the clearance. There was not enough urgency to pick up the seconds. I think Michael [Doughty] had half turned his back on the lad, assuming Fil was going to clear it. The ball dropped between Peter [Hartley] and Michael, and their boy put it in."

"It happens sometimes. I think we came and took the game to them in the second half, for long periods they were pinned in. Fil coming off was a body blow to us, he'd been influential."