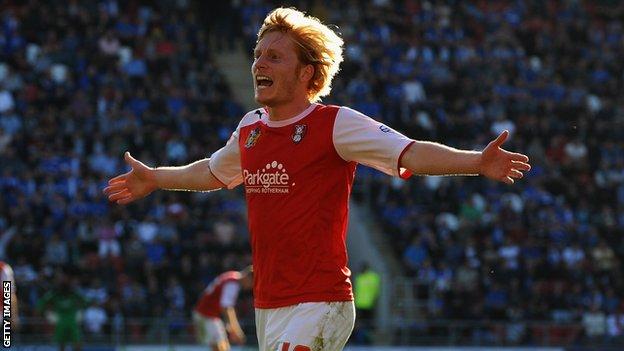 Shrewsbury Town crashed to a sixth straight home defeat as Rotherham United tore them apart with three goals inside the first 21 minutes.

Then, after Tom Eaves had hit the post for Shrewsbury, Ben Pringle made it two with a left-foot volley from 18 yards.

Tavernier, on loan from Newcastle United, added a close-range third with a right-foot shot.

Rotherham's pace and movement proved too much for Shrewsbury, whose injury crisis had reduced manager Graham Turner to having to pick two injured players on his bench.

The Millers could have won by more, but Town keeper Chris Weale made a stunning save to claw away Kieran Agard's header before Pringle hit the bar with the last kick of the first half.

Lee Frecklington missed a golden chance when he rounded the keeper late on, only to miscue wide of the target.

Shrewsbury slip to 20th - just a point above the League One relegation zone - while Rotherham remain fifth, 12 points of the automatic promotion places.

"You can't concede goals like that. They were appalling. And we have asked for it, with poor defending. We couldn't cope with Rotherham's threat.

"It was an embarrassing 20 minutes. After that, the least you should expect is to up the tempo.

"Confidence has been drained from the players over the past few weeks and we have to ideally bring in a few additions to try and rectify that - we've worked hard at that, but not yet achieved anything.

"I take full responsibility for the result. I have never been anything but confident of managing a Football League team. We'll have to see what the next few days and next few weeks bring."