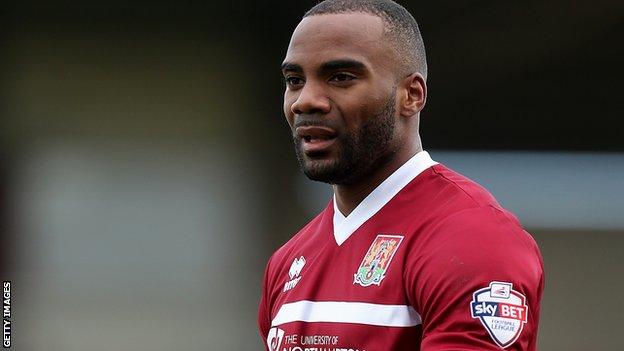 Sinclair's first came when he finished off a break with a low strike and he shrugged off Krystian Pearce before firing in from an angle to make it 2-0.

Pearce's volley cut the gap just before half-time, while Anthony O'Connor hit the post twice in a matter of seconds.

Torquay's Joss Labidie saw his late shot held up by the muddy pitch after an error from goalkeeper Matt Duke.

Manager Chris Hargreaves was taking charge of his first home match following three successive postponements, but his side's first-half performance lacked the urgency and aggression needed in such a key relegation clash.

The Gulls were much-improved after the break, but could not find the breakthrough as Northampton cut the gap between the two sides at the foot of the table to just three points.

"We gave ourselves a chance and a platform to win the game today. We were lively at the top of the pitch and nice and solid.

"I thought the two wingers did great jobs in protecting the full-backs and Ricky Ravenhill and Darren Carter were superb.

"It has to be a group effort, from myself and the staff through to the players and supporters if we're going to succeed this year.

"It wasn't a game for the faint-hearted but everybody's got to go and compete. They've done that tonight."