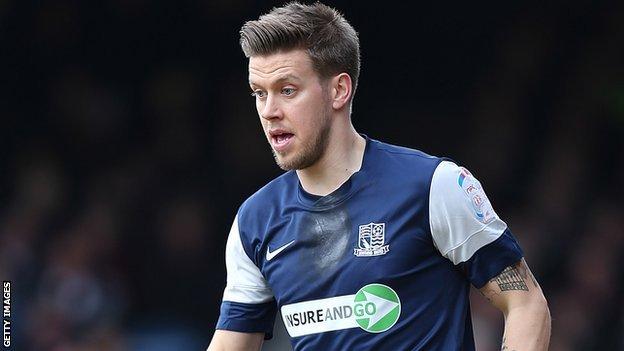 Southend ran out comfortable winners over Chesterfield to leapfrog them into fourth in League Two.

The hosts went in front when Luke O'Neill's cross-field pass set Anthony Straker in the clear, who in turn squared for Kevan Hurst to tap in.

Two goals in two minutes sealed the game for the Shrimpers when Ryan Leonard rounded Tommy Lee to slot in before Barry Corr's lobbed effort.

Chesterfield's Marc Richards then had a penalty saved by Daniel Bentley.

Richards had the chance to score from the spot when Gary Roberts was pushed by Hurst, but his miss compounded their misery.

"I think it was a great, great result. We were standing up to everything they threw at us.

"The whole team performed well today and none more so than Dan Bentley, who stood up to a barrage of efforts when we, in effect, had seen the game off.

"We are proving to ourselves that we can match anybody, so long as we are in the right frame of mind.

"What the players have shown today is how focused they were on beating Chesterfield. We can now enjoy the moment and get back to it next week."