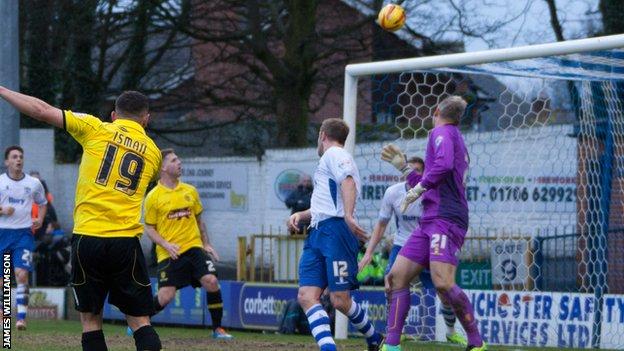 Burton Albion missed the chance to go top of League Two after being held to a goalless draw by struggling Bury.

The visitors could have gone ahead in the first half but striker Billy Kee had his header cleared off the line.

Front men Anton Forrester and Daniel Nardiello went closest for the Shakers, but were unable to make the most of the opportunities that fell to them.

Burton drop down to third in the table while Bury remain two points above the relegation zone.

It was a fairly even first half, but neither side were able to break the deadlock, with Kee's header the best chance of the first period.

Bury threatened just before half-time following good work from Chris Sedgwick, who flashed a cross across the face of goal which neither Forrester nor Nardiello could get their foot on.

The home side started better in the second half as Forrester galloped forward before striking an effort over the bar, and strike partner Nardiello's shot was forced away for a corner.

The former Manchester United man had another strike blocked, with neither side being able to find the net.

"I'm happy with the performance, we desperately wanted three with our position in the league and after last week's performance as well because our work wasn't right last week and our detail wasn't right. This week it was.

"I've been able to bring in some more quality to the football club and it was completely evident.

"I thought we kept the ball really well in the second half, we just needed to bring a bit more tempo into it."

"Well, I think if you'd told me before the game, I was a little bit concerned that we wouldn't quite have the same legs that we normally have and the same bit of energy that so often defines our performances.

"After the first half we had we probably had the best chances, and just didn't put them away, [we] just didn't work the keeper often enough.

"I think Billy [Kee] has had a great one from a corner which you'd normally tuck away and another one quite quickly after that and we got into some really good positions but I didn't think we exploited well enough.

"Second half we just couldn't quite get out. Bury had quite a bit of the ball, created a few chances, not loads and loads but we didn't quite get to grips with the second half."