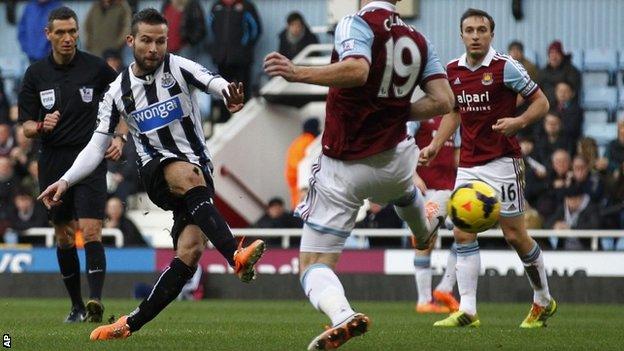 West Ham dropped back into the bottom three as Newcastle ended a run of three league losses with a win at Upton Park.

Victory for Crystal Palace means the pressure is back on Hammers boss Sam Allardyce after his team were outfought for long periods by the lively Magpies.

Yohan Cabaye gave Newcastle the lead with a well-placed shot and Loic Remy poked in before the deficit was reduced when Mike Williamson found his own net.

Cabaye added his second in stoppage time with a free-kick from 20 yards.

It could have been a different result for the hosts had Carlton Cole not skewed Matt Taylor's delivery wide from six yards or Andy Carroll sent his volley into orbit from only slightly further out.

However, anything but a victory would have been unjust for Newcastle who were particularly impressive in the first half, while Hammers fans witnessed another exasperating display that rarely troubled visiting keeper Tim Krul.

The sublime Cabaye opened the scoring after 16 minutes when he sidestepped Razvan Rat before placing his shot into Adrian's bottom left-hand corner.

Newcastle have yet to draw an away game this season, having won six and lost five of their 11 fixtures so far

Remy, who earlier had a shot deflected a foot wide of the post, added the second, and his 11th of the season, soon after when he controlled Moussa Sissoko's right-wing cross with his chest before poking past the Spanish keeper.

Cabaye came close to making it 3-0 when his shot was kept out by Adrian's brilliant one-handed save and, after a 5-0 thumping at Nottingham Forest in the FA Cup and a 6-0 loss at Manchester City in the Capital One Cup, home fans must have feared another drubbing was on the cards.

But just before half-time, West Ham were back in it when Williamson bundled into his own net after Cole's initial shot was blocked by Krul.

And the home side built on that timely boost to put more pressure on Newcastle's defence in the second half.

They should have equalised when Taylor's sumptuous cross was fired horribly wide by Cole. And then fellow striker Carroll, introduced with 30 minutes remaining as he continues his comeback from injury, made a terrible connection with Stewart's Downing cross from eight yards.

How Allardyce could have done with the finishing of Cabaye who, with moments of the match remaining, sealed Newcastle's sixth away win of the season with a free-kick from 20 yards that went in off the upright.

"I think the one regret of the game really were the final minutes of the first half when we'd played so well and got ourselves a great platform to win the game, and to concede at that moment was really, really bad.

"We had to really dig in to win headers and challenges. But really and truly the first half was the platform for victory."

"We have five defenders who are missing at the moment and one that should have been playing, so our back four today [Razvan Rat, James Collins, Roger Johnson and Matt Taylor] have never played together at all this season.

"When you get continuous disruption in your back four you then don't get your solid unit, and sometimes that solid unit that you would like is difficult to keep when players are not used to playing with each other. Newcastle's players exposed that particular weakness and scored two goals.

"It's very disappointing, when you've won at Cardiff, to not get anything here.

"Certainly from our point of view it was more about our defensive lapses rather than the quality of Newcastle's play to score both goals, I felt.

"We could have done better,"