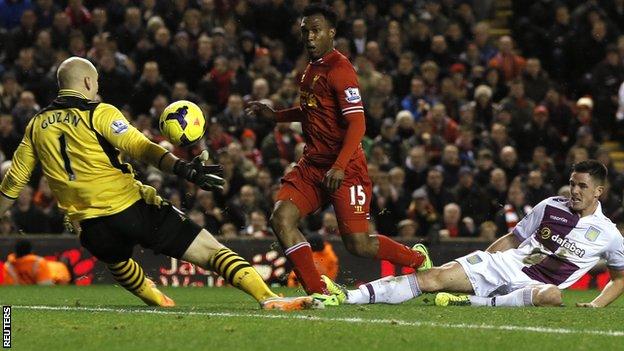 Liverpool recovered from two goals down to draw with Aston Villa and maintain their unbeaten start to 2014.

Daniel Sturridge pulled a goal back for Liverpool just before half-time as he latched onto Jordan Henderson's flick.

Since the start of last season, Luis Suarez has won seven penalties - four more than any other Premier League player.

The draw leaves Liverpool just two points ahead of fifth-placed Everton and a win for the Toffees at West Brom on Monday would lift them above their local rivals.

A point moves Villa into the top half of the Premier League - albeit just six points above the relegation zone.

Liverpool boss Brendan Rodgers insisted last week that his side "will never give up the fight" for the title but, despite their comeback, he will be left to regret a dismal first-half display that saw them drop two points from what must have looked a winnable home fixture.

Paul Lambert's Villa had won just one of their previous seven Premier League matches but should have been ahead even sooner when Gabriel Agbonlahor raced clear on goal from Benteke's flick-on, only to prod wide.

Ashley Westwood then struck straight at home goalkeeper Simon Mignolet before Ciaran Clark headed against the post as an under-par Liverpool were dominated by Villa.

And when the visitors took a deserved lead through Weimann, who stabbed home Agbonlahor's low cross from the left, Liverpool fans must have had a sense of deja vu following Villa's 3-1 win at Anfield last season.

The Reds went into the game with three wins out of three in 2014 but, in front of owner John W Henry on a rare Anfield visit, they looked a pale shadow of their usual free-scoring selves.

Suarez, looking to add to his 22 goals for the season, was nullified by the visitors, while starting him with strike partner Sturridge for the first time since November in an attacking line-up was not having the desired effect.

And Villa's control was further emphasised when Benteke doubled his side's lead in front of the Kop, heading into an empty net after Mignolet misjudged Agbonlahor's right-wing cross.

Aston Villa have lost just once in their last five Premier League visits to Anfield.

The match changed just before half-time, however, as Sturridge latched onto a brilliant flick from Jordan Henderson and, with his first sight of goal all game, lifted the ball into the net for his 13th strike of the campaign.

The goal was tough on Villa but it did not take Liverpool long to take advantage as Steven Gerrard, pushed further forward after the half-time introduction of Lucas, started to dictate play.

The captain sent Suarez through with a brilliant diagonal pass soon after the restart and the Uruguayan, heading away from goal and with work to do, was sent sprawling by Guzan's rash challenge. Villa were adamant no contact had been made but Gerrard coolly side-footed home the penalty.

Driven forward by Gerrard, even after Joe Allen replaced injured substitute Lucas, Liverpool went close through Suarez and Raheem Sterling but were left frustrated as a battling Villa held on.

"We just couldn't get going in the first half. We changed the system after the first goal. I felt we couldn't get any flow. The second half we showed great spirit and got the equaliser.

"You have to give credit to Aston Villa. Christian Benteke was a real threat and Andreas Weimann was a problem. It wasn't until we changed it around that we got a foothold in the game.

"It is a mark of the mentality that we were not at our best but we still dig out a result. We will learn from it and move on.

"It was vital to get that goal before half time. That gave us the spark going into the second half. The response from the players was outstanding."

"Their goal gave them a lifeline going into half-time. I am not so sure about the penalty, I think Brad Guzan has pulled his arms away. I don't think it is a penalty. With the magnitude of the game you have to be 100% sure, Brad's arms have been pulled away.

"I don't think we could have done any more except win the game. There were major plus points, Nearly every player was outstanding."