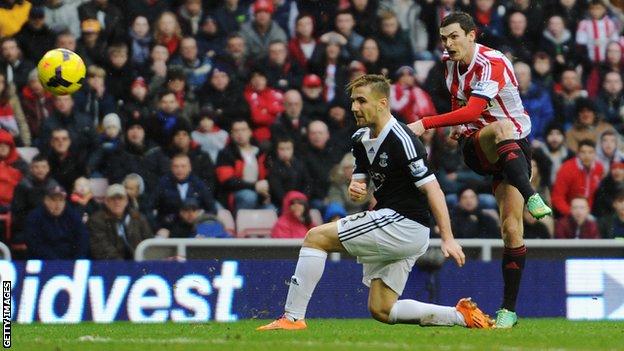 Adam Johnson's fourth goal in two games helped Sunderland come back from 2-0 down to draw against Southampton.

Jay Rodriguez arrowed in a low 22-yard strike to put the visitors ahead and a steered Dejan Lovren volley from a corner extended the lead.

Fabio Borini's shot on the turn then pulled one back for the Black Cats.

Southampton missed several chances and were punished when Johnson powered in a rising shot, with Steven Fletcher having a late Sunderland chance saved.

A home corner fell to Fletcher four yards out but he was denied when Southampton keeper Artur Boruc blocked his effort at point-blank range during a frantic finish.

It is only the second point Sunderland have earned after being behind this season but was not enough to lift them out of the bottom three.

Southampton dominated large parts of the match and injuries to Lovren and substitute Gaston Ramirez - both of whom were carried off on stretchers in the closing stages - will add to the disappointment for Mauricio Pochettino on his first anniversary as manager.

The Argentine committed his immediate future to the club following the departure of Nicola Cortese as Saints chairman this week but had warned of the impact the off-field events could have on his players.

His concerns appeared unfounded early on as the visitors went ahead when Rodriguez chested the ball down and sent a 22-yard strike into the bottom corner.

A lacklustre home side allowed Southampton too much time and space to control the match, with a mistake from Black Cats keeper Vito Mannone epitomising Sunderland's poor display.

It was a breathless game. Sunderland manager Gus Poyet was a long way from a point when his side were 2-0 down and his side were all over the place. But Fabio Borini scored and Adam Johnson equalised.

A goal-kick from the Italian went straight to opposing midfielder Jack Cork, who shot over from 40 yards as he tried to catch Mannone out of his goal.

An angled Luke Shaw shot deflected off Johnson and against the outside of the home post, before Saints striker Rickie Lambert sent an effort just wide after combining incisively with Morgan Schneiderlin - and then Rodriguez had a shot saved with just Mannone to beat.

A second goal for Sunderland seemed inevitable and it arrived when centre-back Lovren guided in a volley from a Steven Davis corner.

There were a few boos from the home crowd, but they almost immediately turned to cheers when Borini - on loan from Liverpool - controlled a Johnson cross, swivelled and beat Boruc with a bouncing shot.

Picking the ball out of the net was as much as the Southampton keeper in a first half in which Sunderland had only 30.5% of possession.

The home side improved after the break, although Saints still looked the most likely to score.

Adam Johnson has scored (four) or assisted (two) all of Sunderland's six goals in their last two league games.

Only a smart save from Mannone kept out another Rodriguez strike, while Jose Fonte headed straight at the busy Sunderland stopper.

Borini thought he had punished the visitors for their missed chances when he slotted past Boruc, but he was rightly penalised for offside.

However, Southampton failed to heed the warning and Johnson equalised when his rising right-foot shot squeezed in off Boruc's arms and the post.

The pendulum had swung in Sunderland's favour and Boruc had to parry away a Craig Gardner strike at full stretch, while also blocking Fletcher's effort from close range to deny the home side a winner.

"The ugliest side of the game was the injuries. We hope [Dejan Lovren and Gaston Ramirez] are OK - both are heading to hospital.

"We deserved to win the game. The players have had a really difficult week, and I want to congratulate them in light of what has happened this week. They put in an amazing effort."

Pochettino on his future:

"In football there are no guarantees, you depend on the results.

"It will be a decision from the people above to decide whether I should be here. It is not me who decides when we meet - it should be the chairwoman who decides.

"We have not had a chance to speak about next season so I don't know [about my future] yet."

"It was looking really bad. We couldn't cope with the pace, power and passing game of Southampton.

"It was looking dark but the goal from Fabio Borini came at the right time.

"We need to be realistic, this is a point gained because we were far from being good enough in the first half. It is incredible how much we changed in the second half."