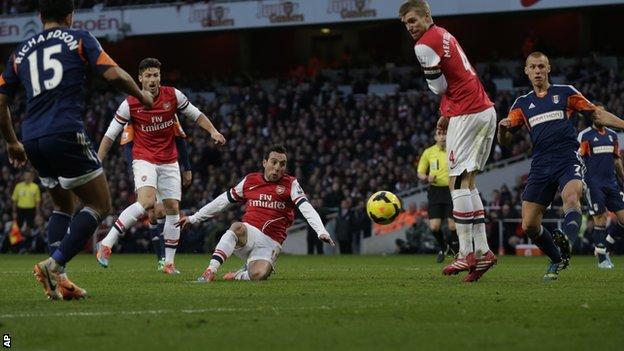 Fulham had frustrated the Gunners and went close when a Steve Sidwell half-volley was smartly saved.

But Cazorla slotted in after an intricate one-touch passing move to break the visiting side's resistance.

The Spaniard latched on to a clearance and drove in a low 20-yard strike to seal the victory.

The Gunners had initially been frustrated by Fulham but were rewarded for their patience and persistence as they continued their impressive home form.

Arsenal have dropped just four points and conceded only three goals in 10 home league games since an opening-day 3-1 defeat by Aston Villa.

The Cottagers are a point off the relegation zone and, after a 4-1 home loss against Sunderland last week, can take some encouragement from a performance which contained a greater degree of defensive resilience.

The omens had not been promising for Fulham heading into the match against the league leaders as they had the fewest clean sheets and had conceded the most goals in the top flight.

And it seemed the visitors might be in for a long afternoon when Mesut Ozil ran onto a Jack Wilshere pass early on and saw a shot beat keeper Maarten Stekelenburg before it was cleared by Fulham centre-back Brede Hangeland.

However, the visitors quickly tightened up and the discipline with which they defended in numbers frustrated Arsenal.

Fulham grew in confidence the longer the game remained goalless and Sidwell had a well-struck shot parried by Wojciech Szczesny.

"Don't take anything away from Fulham as they had their moments in the first half. Arsenal weren't great and Fulham weren't terrible but the result was what everyone expected."

The Polish goalkeeper also gathered at the feet of Alexander Kacaniklic when the Fulham midfielder's touch let him down as he raced through on goal following Dimitar Berbatov's pass.

At the other end, Arsenal were limited to a Bacary Sagna shot being saved by Stekelenburg, who also impressively kept out the follow-up from the offside Olivier Giroud, before the break.

Fulham had drawn at the Emirates on their last two visits and almost took the lead when Berbatov had a shot blocked by Mathieu Flamini, before a Dan Burn header from the follow-up was cleared by Olivier Giroud.

The chance spurred Arsenal into a greater urgency and Serge Gnabry jinked across the edge of the area and had a shot fended away by Stekelenburg.

Sagna then slid in to meet a Cazorla free-kick but had his effort cleared off the line by Burn before follow-up shots from Koscielny and Gnabry were blocked.

The pressure was building on the Fulham goal and the visitors eventually buckled when Cazorla instigated a slick move, which also involved Giroud and Wilshere, before side-footing in a pass from the latter after 57 minutes.

Five minutes later, a Nacho Monreal cross was only cleared to Cazorla and he drove in a low shot from 20 yards to give Arsenal the breathing space of a second goal and control of the game.

The home side were denied a third when substitute Lukas Podolski had a thunderous shot touched on to the post by Stekelenburg, before the home side nearly conceded late on, but Darren Bent fired wide.

"We were maybe not quick enough in the first half. In the second half our tempo was much better and we created chances.

"The players were conscious we had to step up a gear. It was just a question of time and Santi Cazorla delivered two special goals.

On the title race:

"The pressure is there but it is a positive one. I believe it is important to keep focused on the way we want to play and our solidarity in the side, which is exceptional and that will get us the points.

"There are five or six teams who will fight for the Championship. From our side we just need to be consistent."

"I thought we did ever so well. We were up against a top side. We limited them after their strong start.

"If we produced a bit more quality we could have nicked a goal in first half, but we will take a lot of heart from this performance."