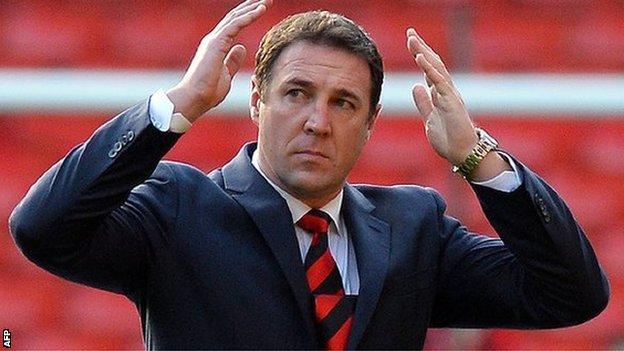 Malky Mackay feels Cardiff successor Ole Gunnar Solskjaer will have to deal with "a culture shock" as he adapts to life as a Premier League manager.

On Match of the Day, Mackay said Solskjaer was "a decent appointment" and backed the club to stay up.

Owner Vincent Tan sacked Mackay on 27 December and brought in the Molde boss.

"It's a great job for him to get, coming from Norwegian football into the Premier League and into a club with that kind of structure," said Mackay.

"There's 30,000 people going to their games every week willing them on.

"He has done really well in Norway, but the Premier League will be massively different and a bit of a culture shock to begin with."

Mackay's sacking came after Tan wrote to him asking him to resign or be sacked.

Tan also accused Mackay of overspending in the transfer market and announced the manager would have nothing to spend in the January window.

The 41-year-old Scotsman refused to resign and subsequently led the team in Premier League matches against Liverpool and Southampton before he was sacked.

"I look back on it really fondly. We got to the play-off final and we achieved promotion.

"I think there's a squad there that's absolutely competitive and can stay up.

"They're a great group of players with terrific fans behind them."

Mackay is looking to get back into management after sorting out some issues with his old club.

"I've got a situation with Cardiff at the moment that needs to conclude so in the meantime, I will be watching a lot of football," he said.

"I loved my time at Cardiff and loved managing in the Premier League.

"I've not spoken to anyone at the moment, I'm just taking some time out for now, but I would love to get back into management at some point."