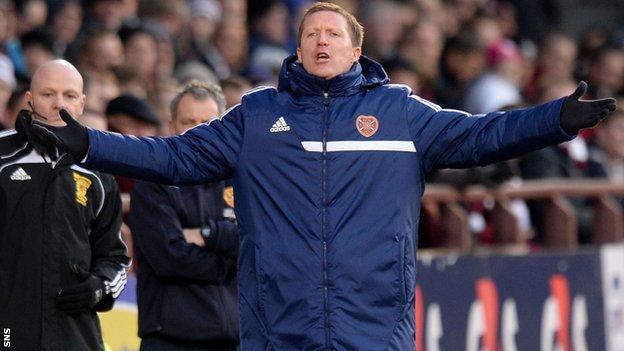 The Scottish Premiership's bottom side were already without captain Danny Wilson and Jason Holt and lost Kevin McHattie and Jamie Walker versus 'Well.

"The early signs are that he might have done his metatarsal, which would be a disaster for us. Injuries are certainly killing us."

Walker was seen on crutches following the match while McHattie was withdraw early in the second half with Locke admitting he had been "struggling".

John Sutton's goal proved to be the winner at Tynecastle, with Hearts coming close several times to a leveller in the second half.

Ryan Stevenson struck the bar with a cross and was one of several players to test goalkeeper Gunnar Nielsen.

"I'm just hoping that one week they'll get a wee break that they deserve," added Locke, whose side are now 20 points adrift at the bottom of the table.

"Every single one of them gave us everything. Everybody to a boy tried their heart out.

"I thought we totally dominated the second half and we're just not getting that wee break that we need.

"If we play like that we've got a better chance of turning the corner a bit. They did great, they did everything that we asked of them."