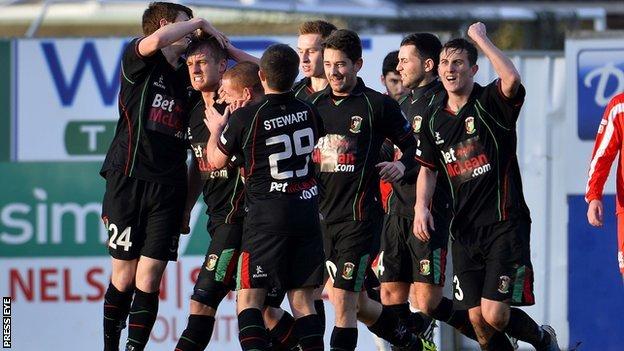 Aaron Boyd poked in from a yard out on 19 minutes, Darren Murray levelled with a 27th-minute penalty, but Allen tapped in on 57 and fired home in added time.

A Joe Gormley penalty put Cliftonville ahead against Coleraine but Stephen Dooley slotted home the equaliser.

Liam Boyce headed in on 47 but David McDaid's right-foot volley made it 2-2.

Gormley got the scoring underway with his 28th goal of the season after Aaron Canning had fouled Martin Donnelly inside the area.

Eoin Bradley set up short-term Bannsiders signing Dooley for his second goal in two games for the 39th-minute leveller.

Boyce met Ronan Scannell's cross with a fine header two minutes after the break but McDaid grabbed his first goal for Coleraine after 59.

An exciting cup tie at Shamrock Park saw the Glens take the lead when striker Boyd reacted quickest after David Miskelly had initially saved from Allen.

Niall Henderson conceded the penalty from which Murray found the net from the spot and the Ports forward almost added another soon after, but Elliott Morris produced a fine save.

Allen made amends after the break by scoring on the rebound from close range after Miskelly denied Marcus Kane's header.

The impressive Jordan Stewart went close and Josh Barton fired wide at the other end, before Ronnie McFall's side was reduced to 10 men when Chris Ramsey received a second yellow card.

Allen's effort found the bottom of the net in the dying seconds to secure his side's passage into the sixth round draw.

Elsewhere, a Rory Hasson own goal saw Queen's beat Limavady United 1-0, while Lisburn Distillery had Ben Brown and Stuart Thompson dismissed late on as they drew 0-0 with PSNI.

Bangor were the day's joint top-scorers as they beat Glebe Rangers 7-1 at Clandeboye Park, Paul McDowell (2), Mark Cooling (2), one a penalty, Tommy Lamb, Grant Gardiner and Jordan Forsyth getting the goals.

A late Ben Roy strike gave Carrick Rangers a 3-2 victory over his former club and Championship One rivals Dundela.

Jody Lynch scored Carrick's other two goals, while Steven McCain and Owain Beggs were on target for the visitors.

Conlith McCaughan's first-half goal proved to be the winner for Ballymoney United against Banbridge Town, and Ballyclare Comrades saw off Kilmore Rec 3-0 thanks to efforts from Johnny McClurg (penalty), Chris Trussell and Daniel Smith in the opening 13 minutes.