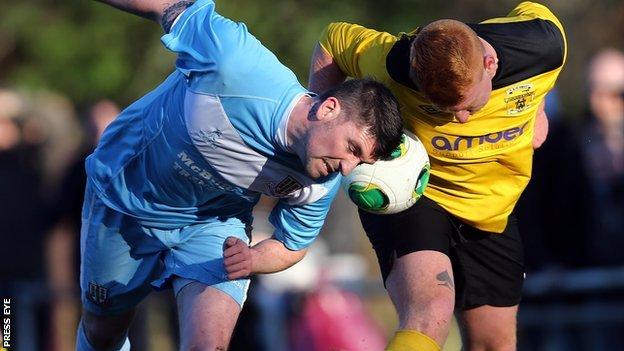 Ballymena new boy Darren Boyce scored on 86 minutes at Tillysburn Park to earn his side an Irish Cup fifth round replay with Harland and Wolff Welders.

Philip Simpson gave the home side the lead, Tony Kane levelled, Mattie Burrows made it 2-1 to the Welders, but Boyce headed in four minutes from time.

Gary Smyth's Welders dominated the first half against on-form Premiership outfit Ballymena and led at the interval after defender Simpson shot home from 10 yards from a Mark Magennis corner on five minutes.

Kane's six-yard diving header from Jim Ervin's cross on the hour restored parity, but Burrows rifled in on 77 minutes to nudge the underdogs in front again.

Boyce saved his new club's blushes when he levelled in the 86th minute, so the clubs will replay at the Showgrounds on 21 January.

Strabane produced a gritty display to claim a goal-less draw at Ferney Park, Richard Lecky squandering the best chance of the match late on when he missed the target from close range.

Matthew Snoddy's fourth-minute penalty appeared to have put Crusaders on their way at Seaview, but Stephen Baxter's side were then rocked by Stephen Brown's 61st-minute equaliser.

A Gareth Liggett own goal and an Andy Waterworth strike saw Linfield 2-0 to the good against visitors Dergview at the break.

Burns grabbed a brace in the second half, with Philip Lowry completing the rout 13 minutes from time.

Daniel Hughes was on target twice as Warrenpoint Town beat Chimney Corner 2-0 and then spurned the chance to make it a hat-trick by missing from the penalty spot.

Stefan Lavery and Ryan Harpur, with two penalties, were the other scorers for Dungannon, with Chris Dowie netting the consolation for the hosts, who had Michael Walsh sent-off.