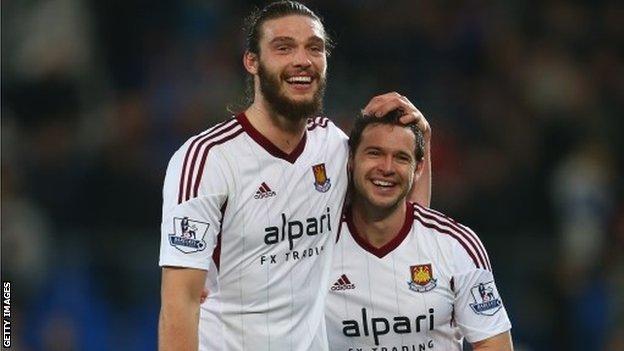 West Ham were spurred on to a 2-0 win at Cardiff on Saturday by criticism of their run of poor results, according to assistant Neil McDonald.

Victory was the Hammers' first in the league since 30 November, while they came into the game having conceded 11 goals in two cup matches last week.

"I think the whole squad has galvanised together, probably because of the criticism we've received," he said.

"They showed they were willing to put their bodies on the line."

The win lifted manager Sam Allardyce's side out of the relegation zone and moved them to 18 points, above 18th-placed Cardiff on goal difference.

What made the victory more impressive was that it followed a 5-0 defeat by Nottingham Forest in the FA Cup and a 6-0 loss to Manchester City in the League Cup. They also played the final 20 minutes in Cardiff with 10 men after centre-back James Tomkins was shown a second yellow, while fellow defender Guy Demel was carried off on a stretcher off in the first half with a head injury.

McDonald added: "The players got what they deserved and they showed that they are working very hard to put things right.

"We had a tough time last week, conceding a lot of goals, but everybody has stayed strong and stuck together.

"We had a couple of injured players back and we put in a fine, battling performance, and scored two brilliant goals."

They were scored by striker Carlton Cole, just before half-time, and captain Mark Noble late in the match, with his assist coming from Andy Carroll.

The former Liverpool striker, who was signed on a permanent deal for a club record fee of £15m in the summer, had not played since his loan spell last season.

"It's great to have Andy back helping the team out, holding the ball up and flicking the ball on, and obviously he has got down the line and made a telling pass for Mark Noble to score the second goal," said McDonald.

Meanwhile, the West Ham assistant manager came out in support of Allardyce, whose position at Upton Park has been under scrutiny.

"It's great for Sam because he's had some stick from all quarters, but in our inner circle we have stayed strong and believed in what we're doing and that's what we'll continue to do.

"Sam has never quit anything he has done and why should he? He knows what he is doing. It showed today that the players are firing on all cylinders for him and have come out of the bottom three with a clean sheet and two goals."