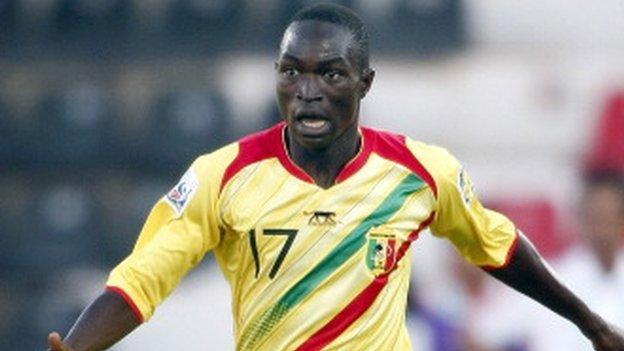 Mali shocked African champions Nigeria 2-1 in the sides' opening Group A match at the African Nations Championship in Cape Town Stadium on Saturday.

Goals from Abdoulaye Sissoko and Adama Traore (pictured) gave Mali a stunning start to the competition.

Mali took the lead in the 17th minute with a ferocious drive from Sissoko after breaking free on the right flank after Mali had cut open the Nigeria defence.

They then missed two chances in quick succession - on 20 and 21 minutes - to double their lead as they dominated the Super Eagles, and just after half-time Nigeria cleared off the line after a corner.

On 50 minutes the Eagles got reward for their pressure when Traore made it 2-0 with another vicious shot which went through the legs of Nigeria keeper Chigozie Agbim.

Although Nigeria hit back four minutes later with a glancing header from substitute Fuad Salami, it was not enough to prevent defeat for the tournament favourites.

Earlier on Saturday, a stunning goal from Hlompho Kekana helped hosts South Africa to a 3-1 victory over Mozambique in the opening match of the competition.

With the tie delicately poised at 1-1, the Mamelodi Sundowns midfielder powered home a 40-yard shot that left goalkeeper Soarito a bemused spectator.

And the goal changed the complexion of the Group A clash in Cape Town.

Bernard Parker, who had earlier cancelled out Diogo's deflected shot, grabbed his second to seal the win.

Mozambique went into the match on the back of an intensive two-month training camp.

And they took the lead after just 11 minutes when South Africa goalkeeper and captain Itumeleng Khune was fooled by Diogo's deflected shot.

But the hosts equalised on the half-hour mark when Parker scored from the penalty spot.

And they could and should have gone to the break 2-1 up but for a horror miss from Katlego Mashego.

Siphiwe Tshabalala flighted a delightful cross into the area but Mashego fluffed his lines from just four yards when it appeared easier to score.

Bafana Bafana would not be denied, though, and after Kekana's stunning strike, Parker put the result beyond doubt when he netted from close range in the dying minutes.