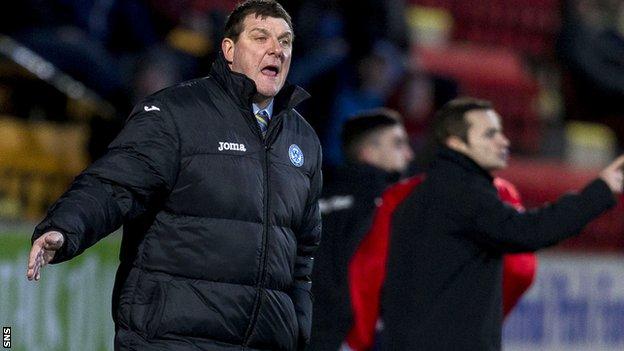 St Johnstone manager Tommy Wright says his players need to work on their away form after their 2-0 win at home to St Mirren.

Goals from Murray Davidson and Stevie May sealed the win, but Saints have not won in the road since beating Hearts in November.

"It's difficult to put it in week in-week out," said Wright.

"We don't go out not to do it, it just happens, particularly away, which is an aspect we've got to improve."

St Johnstone dominated the first half, with top-scorer May and captain Dave Mackay both hitting the woodwork, but Wright's men eventually took the lead in the 70th minute when midfielder Davidson headed in from a David Wotherspoon corner.

May secured the points when he curled the ball in from the edge of the penalty area three minutes later to seal a comfortable a victory.

"I thought from start to finish, we were excellent," said Wright.

"We started at a good tempo and we got more balls and bodies in the box.

"I thought today we created numerous opportunities. The only disappointing thing was that it was 0-0 at half-time."

St Mirren started the second half in a more positive gear, forcing St Johnstone back, but Wright had advised his players to stick to the game plan, and the rewards soon came.

"We told them to go out in the second half and do the same, and the goals would come," said Wright.

"I'm really pleased we got the victory. We were so good, that I thought we could maintain that.

"We emphasised that it was important not to give them a sniff and get back in the game. It's not often teams command a full 90 minutes, but that's what we did."