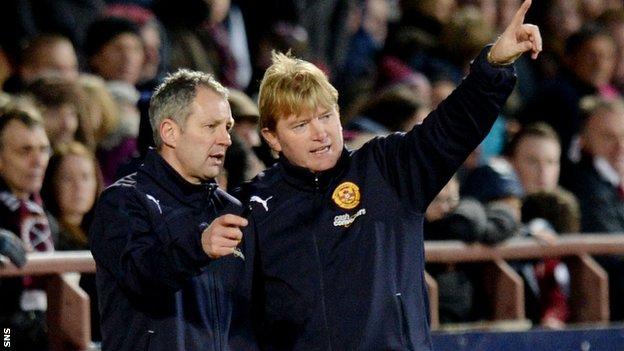 Motherwell manager Stuart McCall says clinching a top-six place is his first priority after moving to within a point of second-place Aberdeen.

to claim a sixth straight win.

"We've got to really consolidate that top-six spot and then look hopefully at a European spot," said McCall.

"There's a lot of good sides up there but if we maintain the form we're showing then we've got a good chance of being in that top three."

John Sutton netted the only goal in the first half at Tynecastle and McCall's men were made to work hard for the three points with Hearts coming close several times in the second period.

"I thought we played some really good stuff in the first half," McCall told BBC Scotland.

"We could have gone in a wee bit more ahead. We're really pleased with the way we moved it.

"It's important to try to get the first goal against a young side.

"But, in fairness to Hearts, the young boys' second half was a really spirited performance.

"I think we merited it over the 90 minutes but certainly the gave us a few frights in the second half."

Lionel Ainsworth, who McCall said could have scored a hat-trick with the chances he had against Hearts, extended his loan from Rotherham until the end of the season and Henri Anier has joined on a full-time deal after a loan spell from Viking Stavanger.

And McCall is not planning any more business but may look to add another goalkeeper if Lee Hollis has to undergo surgery on an ankle injury.