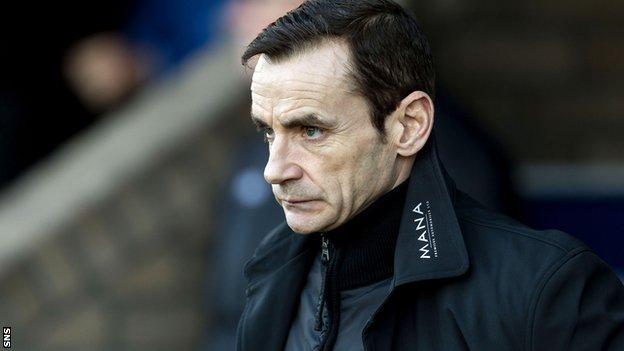 St Mirren manager Danny Lennon conceded that his side were second-best after slumping to a 2-0 defeat by St Johnstone at McDiarmid Park.

The Buddies barely threatened in a match almost totally dominated by St Johnstone, and were fortunate to escape with a narrow scoreline.

"I must give St Johnstone credit in terms of the way they play the pitch," said Lennon.

"They got the ball, they competed for second balls, and that disappoints me."

Second-half goals from Murray Davidson and Stevie May rounded off another disappointing defeat for St Mirren after a first-half of almost constant pressure and chances for the hosts.

What we have to start doing if we want to compete at the right end of this table, you have to come to places like this and pick up points

Lennon said it was his intention to field a team that could compete, but a lack of concentration cost his side the game.

"We were determined to come here and give a good account of ourselves," said Lennon.

"We huffed and puffed and came in at half-time and we changed a bit of the dynamics at the top to go and chase it.

"We conceded from a corner - and someone with the experience and history that Murray Davidson has popping up, you've got to be careful of that.

"I thought we lost our focus, and then you look at the second goal - once again, we have a very good opportunity to clear the ball, and we don't - and it's a great finish from Stevie May. I can't take away from him.

"To compete at this level, you've got to be focused and ready to concentrate for the full 90 minutes."

St Mirren have now won only five of their league matches all season and continue to struggle in the bottom half of the table, albeit with a significant advantage over basement club Hearts, but Lennon is all too aware of the importance of racking up away points as the second half of the season rolls on.

"We've not taken much points over the Festive period," said Lennon. "We were in the games, even the Celtic game at half-time, but today we lacked a good bit all over and that disappoints me.

"Do you put it down to a bad day? I would hope so - but what we have to start doing if we want to compete at the right end of this table, you have to come to places like this and pick up points.

"Once again, we haven't taken that opportunity.

"But we'll learn from it - we'll take the negatives and turn them into positives, and when we play Hibernian next Saturday, we're focused and determined for the 90 minutes."