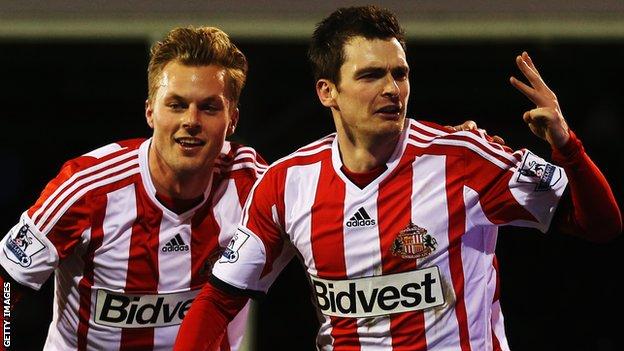 Johnson, 26, scored his first hat-trick as a professional on Saturday as he inspired the Black Cats to a 4-1 Premier League victory at Fulham.

"It's always in the back of my mind," he said. "I felt the door was closed as each week went on, but hopefully I can keep playing like this."

Johnson, who can play on either flank, made his England debut in a friendly against Mexico in May 2010, but was not included in the squads for both the 2010 World Cup and 2012 European Championship.

He has only gained two caps since Hodgson became England manager in May 2012, but could benefit from Theo Walcott's knee injury, which will rule the Arsenal forward out of this summer's World Cup in Brazil.

He said: "Hopefully I can force my way back into the squad. I've been working hard and, at the beginning of 2014, I said it was a new year, a new start and time to get back to how I had been playing in the past."

Johnson has had a frustrating season and was recalled to the side against Fulham after impressing as a substitute in Sunderland's 2-1 win against Manchester United in the first leg of their Capital One Cup semi-final.

As well as scoring three times at Craven Cottage, he also set up his side's second goal, scored by Ki Sung-Yueng, as the Black Cats moved off the bottom of the table.

"Adam personified the quality of the display," said Poyet. "He was outstanding and every decision he made was a good one.

"He is a very good player but he needs the ball and needs the chance to attack the full-backs. He needs the team to play that type of football to give him the ball in a good position.

"In the last three games, he has been very important and I hope he will maintain that level."