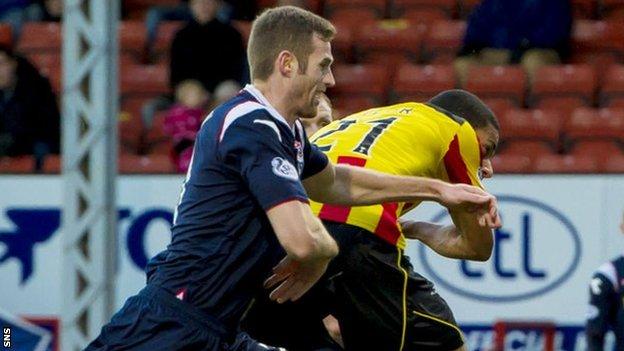 Derek Adams says conceding three goals in has strengthened his resolve to bring in another defender.

The County manager is also looking for a goalkeeper and is still hoping to conclude a loan deal for Notts County striker Yann Arquin.

"I told the centre-halves at half time they were making Lyle Taylor look a very good player," said Adams.

"That's unacceptable because he is a good player, but he's not a really good player.

"I could have played against my two centre-halves today and looked good, while Ikonomou needs to get off his deck chair."

Adams brought in Evangelos Ikonomou this month after the Greek left-back agreed to return to the Dingwall club from Veria in his homeland, but the manager's transfer dealings will continue.

"The goals we gave away were terrible," he said. "Partick were not in the game before that and we found ourselves 2-1 down without them having done anything.

"In the first half, some of the decision making was so poor.

I thought Kiss was outstanding. You could see the quality that he has got and why he has been playing for such a good team at Cardiff

"We need to strengthen in that area this month now, obviously, and we still have some of the budget available we did not spend in the summer."

Goalkeeper Michael Fraser also made a negative contribution in allowing a Taylor drive slip through his grasp to cancel out Filip Kiss's opener.

"We are looking in that area," said Adams, when asked if he was still looking for a goalkeeper having failed in a bid for Manchester City's Eirik Johansen.

Kiss made an instant impact, scoring twice only days after his loan deal from Cardiff City was confirmed.

"I thought Kiss was outstanding," said Adams. "You could see the quality that he has got and why he has been playing for such a good team at Cardiff.

"The goals we lost were shockers, but he has had to pull two out of the bag to save us."

Adams thought that, with Kiss forming a fine partnership with Michael Tidser, signed on loan from Rotherham United, his side had "controlled the game in the middle of the park".

However, he added: "I would have taken a point after 90 minutes because we were losing 3-1 down."