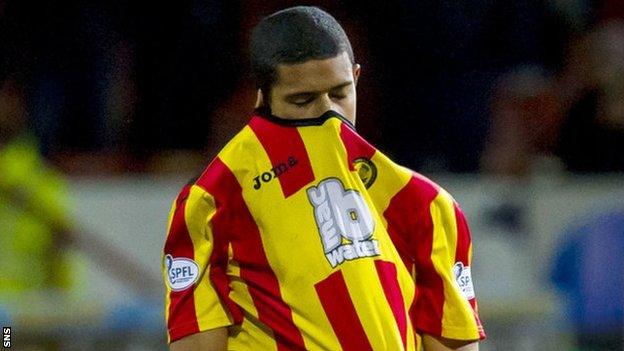 Alan Archibald admits his Partick Thistle side are struggling to handle the pressure of searching for a first home league win back in the top flight.

Thistle wasted a two-goal lead with the second-bottom side in the Scottish Premiership.

"It's starting to look like this problem of not winning at home is a subconscious issue," said Archibald, whose side remain third bottom.

"Because when you are 3-1 up at home you should be on easy street."

County fought back through goals from Ben Gordon and Filip Kiss.

"It feels like a defeat," he added. "We have struggled to score at home all season and then get three today and still don't win the match. It's hard to take.

"I thought last week as well, we didn't react well when we went ahead and I think it was the same today.

"The worse thing to do as a defender is to retreat, but we moved back five yards and invited County forward and it caused all sorts of problems."

Lyle Taylor scored twice to take his total to three goals in three appearances since arriving on loan from Sheffield United.

And Archibald lamented that defensive errors had prevented his goalscoring leading to a victory.

"All season we've found it difficult to do both things right and hopefully next week we'll organise both a bit better," added Archibald.

"Lyle's given us a different dimension up front and it was good to see today."