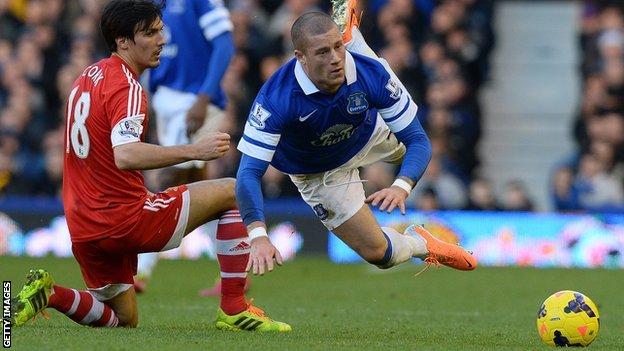 Everton and England midfielder Ross Barkley has a broken toe and could be out for up to six weeks.

Barkley, 20, has excelled for the Toffees this season, but suffered the injury during his side's 4-0 FA Cup third-round win over QPR on 4 January.

He missed last Saturday's 2-0 victory over Norwich with the problem.

Everton say Barkley has a "small fracture" and the length of his absence depends on how quickly the injury heals.

The player is now set to miss the Merseyside derby against Liverpool at Anfield on 28 January, and could also be out of Premier League games against Tottenham and Chelsea in February.

Everton defender Leighton Baines fractured his toe when the Toffees met Liverpool at Goodison Park in late November, an injury which saw him miss six matches.

Barkley's injury did not prevent the midfielder, who has earned three England caps this season, from travelling with the squad to a warm-weather training camp in Tenerife ahead of their trip to West Brom on Monday, 20 January.

Everton, who recently signed 27-year-old Republic of Ireland international winger Aiden McGeady from Spartak Moscow for an undisclosed fee, are fifth in the Premier League, seven points behind leaders Arsenal.