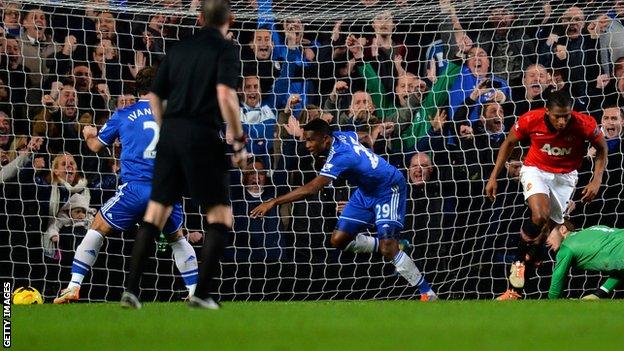 A hat-trick by Samuel Eto'o ensured Chelsea maintained the pressure on the Premier League pacesetters and surely ended Manchester United's chances of retaining their title.

The veteran striker scored twice in the first half and completed his treble just after the interval to leave Chelsea only two points behind leaders Arsenal and one adrift of Manchester City.

United manager David Moyes cut a dejected figure at the final whistle as he surveyed a 14-point gap to Arsenal at the top of the table - with matters made worse by the late red card for Nemanja Vidic following his needless lunge at Eden Hazard.

Javier Hernandez's goal hardly qualified as consolation and United must now try to overturn a 2-1 deficit against Sunderland in the Capital One Cup semi-final second leg at Old Trafford on Wednesday without their suspended captain, who starts a three-match ban.

Chelsea boss Jose Mourinho has played down his side's title credentials but there is a real sense of momentum building around Stamford Bridge that will have only increased with this victory, the Portuguese's 100th in the Premier League. His first also came against United, back in 2004.

In Moyes's defence, he was without his injured world-class strike pair of Wayne Rooney and Robin van Persie - but even those mitigating circumstances cannot disguise the brutal truth that United's current squad is simply not in shape to mount a title challenge and is inferior to that at Arsenal, let alone Chelsea and Manchester City.

Ton up for Mourinho

The visitors were bound to lack a cutting edge with Rooney and Van Persie out, whereas Mourinho felt confident enough to leave out Fernando Torres, despite his goal in the win at Hull City, and restore Eto'o.

And how Mourinho was rewarded by Eto'o as the Cameroonian provided the finishing touches that Moyes's men were unable to apply to some good work of their own, particularly early on.

United's brisk start pinned the hosts back and Petr Cech had to plunge down sharply to save from Ashley Young in the opening moments, while Adnan Januzaj did much to confirm his rich promise.

But for all the visitors' early impetus, it was Chelsea who took the lead after 18 minutes when a left-foot shot from Eto'o took a vital touch off Michael Carrick's outstretched leg and looped over United keeper David de Gea.

The champions were still showing some ambition and almost equalised when Januzaj's cross evaded the Blues' defence and landed at the feet of Welbeck. He could only shoot straight at Cech, however, appealing in vain for a penalty as Cesar Azpilicueta appeared to catch his leg just as he shot.

It was to prove a decisive moment as Eto'o doubled Chelsea's lead seconds before half-time, Cahill squaring for the striker to sweep home a finish that De Gea touched but could not keep out.

United's hopes of getting something from the game took a final blow four minutes after the break when they were let down by dreadful marking at a corner. De Gea scrambled out Gary Cahill's header but the poacher supreme Eto'o pounced to turn home the loose ball.

All the optimism created by a promising opening had long since disappeared and it was simply a question of damage control.

Hernandez put something of a gloss on the scoreline when he turned in from almost on the line after Phil Jones fired a scuffed shot across the face of goal with 14 minutes left.

A familiar fight back

The visitors applied some belated pressure but Mourinho was able to shore Chelsea up with the introduction of John Obi Mikel and Nemanja Matic, the £21m signing from Benfica who has returned for a second spell at Stamford Bridge.

And just as United hoped to escape from west London without any further damage, Vidic lunged in on Hazard when there was no danger and received a red card.

United's frustration was now in danger of boiling over and Rafael was fortunate to receive only a yellow card for a flying two-footed challenge on Cahill.