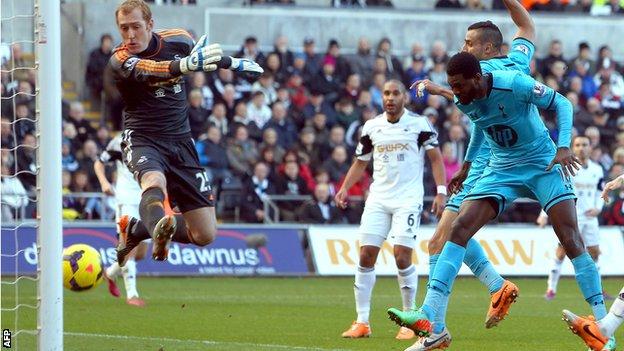 The Togo international headed Spurs ahead in the 34th minute and fired in his second in the 70th after Chico Flores had scored an own goal.

Tottenham join Liverpool on 43 points after their fifth win in six League games under their new manager.

Adebayor's fortunes have turned around since the departure of former boss Andre Villas-Boas on 16 December.

After being largely sidelined under the previous manager, the striker has been given Sherwood's backing and has repaid that faith with six goals in eight appearances.

This was Tottenham's fifth consecutive away win in the league - their best run since 1960 - and has taken them up to fifth in the table.

But while Sherwood appears to be able to do no wrong, Swansea manager Michael Laudrup's Midas touch has deserted him.

With five first-choice players sidelined by injury, the Swans have now gone eight games without a win, and are 15th, only three points clear of the relegation zone.

Their next three league games - against struggling Fulham, West Ham and Cardiff City - will be crucial to their hopes of Premier League survival.

Against Tottenham, Swansea's early dominance gave little indication of what was to come.

Sherwood's decision to deploy an extra man in midfield appeared to have little impact as the home team dominated possession.

Tottenham goalkeeper Hugo Lloris had to be sharp to snuff out an early chance for Bony and also parried a powerful shot by Jonjo Shelvey.

He was beaten on the 23rd minute when Bony's 25-yard drive hammered against the Spurs crossbar.

The Ivorian failed to steer a header goalwards after sneaking in behind the defence, and then his pass to Wayne Routledge was too light as the winger was clear on goal.

Spurs made the Swans pay for their missed chances when Christian Eriksen was given time to cross from the right and Adebayor headed in from five yards.

Swansea did well not to concede again before half-time, but their resistance crumbled early in the second half when Kyle Walker broke on the right and Flores turned his cross into the Swansea net.

The home team looked increasingly vulnerable to Spurs' quick breaks, and it was little surprise when Danny Rose set up Adebayor, who fired in low past Gerhard Tremmel.

Bony's powerful volley gave the score some respectability, but with Shelvey limping off early in the second half to add to Laudrup's injury worries, times are hard at the Liberty Stadium.