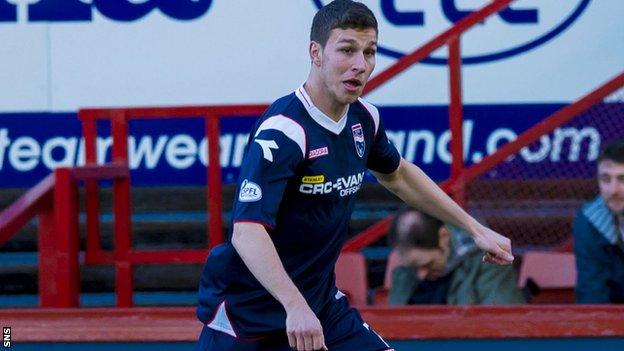 Filip Kiss feared he was only going to last a few minutes of what turned out to be an impressive two-goal debut for Ross County.

The on-loan Cardiff City midfielder thought he had picked up an injury before opening the scoring in .

"I had a tight calf at the start and I was going to come off," he explained.

"But I carried on playing and the muscle loosened up, so I am happy that I could play almost to the finish."

By the time Kiss was substituted in stoppage time, the 23-year-old Slovakian had supplied a sublime display of passing capped by two composed finishes.

His performance was all the more remarkable considering he had not played a first-team game since Cardiff suffered an FA Cup defeat by Macclesfield almost exactly a year ago.

He said to me that, after 10 minutes, he could feel his calf. For him to go on and put on a performance like that, it's incredible really

"That's why I felt a bit fatigued at the end, but I'm happy to at least get a point against very hard opposition," he said.

"It is so frustrating not playing for the last year for the first team and only for the reserves and I just couldn't wait to play again."

Kiss found the net once in his 33 games for Cardiff before their promotion to England's top flight but says he was more prolific back in his homeland.

"I scored a few goals back in Slovakia when I was with Slovan Bratislava and we won the league and the cup," he recalled.

"If I want to get to the highest level possible, I need to be my best at all times and scoring goals and I'm very happy that I've been given this opportunity by Ross County."

The midfielder enjoyed his first taste of the Scottish Premiership.

"The Scottish league looks very good, a bit more physical than I expected," he concluded.

"A bit more long balls and it was hard for me to get used to it, but once I adjusted, I did some good things because I scored two goals, but I think I can still improve."

Kiss quickly established an understanding with Michael Tidser, himself making his first start for County since arriving on loan from Rotherham United.

The former Morton midfielder is impressed with what he has seen after only a few days training together and one full game.

"He said to me that, after 10 minutes, he could feel his calf," revealed Tidser. "For him to go on and put on a performance like that, it's incredible really.

"He's not come from Cardiff and been a bad player.

"But we're delighted to have him and hopefully he can keep producing performances like that.

"His first goal I couldn't really see as I was out wide left, but the second one he's done well to ghost into the box and showed great composure and stuck it away."