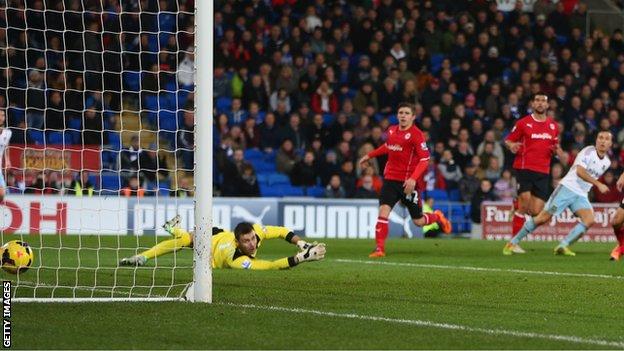 Cardiff City goalkeeper David Marshall has warned that they must make the most of home advantage if they are to survive in the Premier League.

The Bluebirds at the Cardiff City Stadium, a result that saw them replace the Londoners in the bottom three.

"It was a bad result for us and a huge game, a home game against a team roundabout us," Marshall said.

"It was just a disappointing goal, I think in the Premier League whoever scores the first goal the other team is always going to find it tough to get back in," Marshall added.

"It's disappointing just generally because it was the gaffer's first [league] game and the home form has got to be good for us to stay in the league, and recently it's not been up to standard."

Solskjaer has replaced the as Cardiff manager, but despite the upheavals at the Welsh club Marshall says the squad has remained strong.

"It's a good group of boys and we're pretty tight as a group. There's not been a hell of a lot of changes really in terms of what we've been trying to do," said the 28-year-old Scotland keeper.

"The gaffer has fitted in great, the staff that he has brought in have been great... the training has been good and the boys were organised, but we never started the game well.

"Second half we put them under a lot of pressure but we just couldn't get that equaliser.

"Obviously it's a difficult circumstance to come in with what has happened, but we can't use excuses for that really either.

"We need to pick up results quickly or else we could find ourselves in a real bit of bother.

"We've got two huge league games now away to Manchester City and Manchester United. It's going to be difficult to get points there."