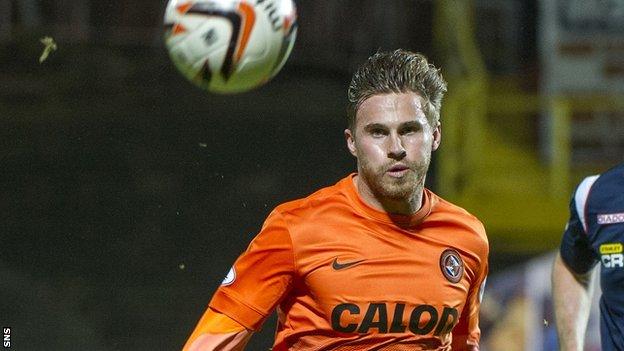 Chairman Stephen Thompson has confirmed Dundee United will not extend the loan spell of David Goodwillie.

The Blackburn Rovers striker rejoined the Tannadice side on loan in July and scored six goals in 22 appearances.

"We haven't extended it," Thompson said before . "It's up to David where he goes from there.

"I don't think it was necessarily to do with the budget, it's much to do with what he's done since he came back, it's been a bit of a disappointment."

There may be another player in, certainly before the window shuts, and we're not looking to put anybody out in the transfer window

Goodwillie, who is attracting interest from Aberdeen, scored 40 goals in 136 games for United before moving to Ewood Park in a £2m switch in August 2011.

"I know David well and he did very well when he was first here at the club," Thompson explained on BBC Radio Scotland.

"[Manager] Jackie [McNamara] and I talked about it for many weeks to see how things went and it didn't work out, that's what happens in football at times."

Commenting on the 1-1 draw at the Caledonian Stadium, McNamara said: "I don't think there was much in it.

"I don't think there was a great deal of quality in the match, maybe due to the pitch. Obviously we're disappointed not to get the win."

The Highlanders could have gone ahead again when John Souttar was penalised for a challenge on Graeme Shinnie but Radoslaw Cierzniak saved the spot-kick taken by Nick Ross. 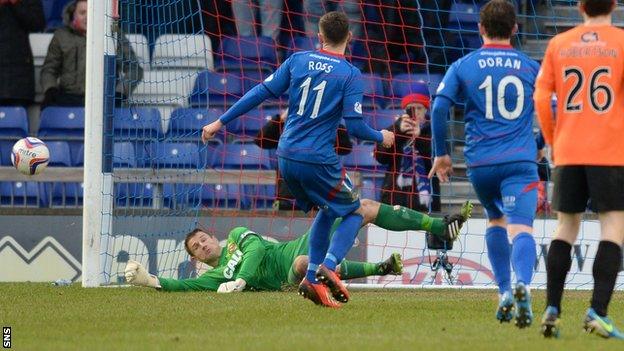 "I'm delighted that Rado's managed to save that because he's had quite a lot of practice in the last couple of months," said McNamara.

"There's been a lot of penalties against us. That's, I think, six in the last eight games."

Brian Graham landed awkwardly in the second half and was replaced by Farid El Alagui, who made his debut following .

"He's done his ankle," McNamara said of Graham. "I think he heard something pop. Hopefully it's not as bad as we first thought but it didn't look good for him.

"I was delighted with [Farid El Alagui]. He gave us a real boost coming on. I think if we can supply the balls into the box for him, he'll finish them for us."

Meanwhile, Thompson revealed there may still be an addition to the squad before January is out.

"Jackie and I will have a chat about what we want to do with the team," Thompson added.

"He's in no rush, as such, to just bring anybody in. There may be another player in, certainly before the window shuts, and we're not looking to put anybody out in the transfer window."