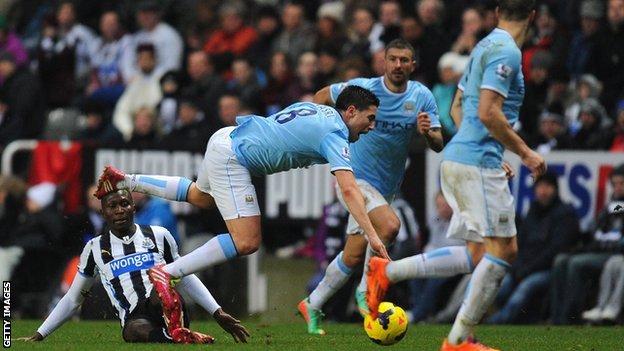 Manchester City midfielder Samir Nasri has been ruled out for eight weeks with a medial knee ligament injury suffered against Newcastle.

Nasri was carried off on a stretcher after a tackle by Mapou Yanga-Mbiwa in at St James' Park on Sunday.

It was feared he could face a lengthy spell on the sidelines.

"I suppose it's kind of good news that I will be out around eight weeks," Nasri said on Twitter.

"Thank you everyone for your kind words and overwhelming support."

It means he is scheduled to miss at least 11 games, including matches against Tottenham, Chelsea, Barcelona and Manchester United. His first game back could be the second leg of the Champions League tie with Barca on 12 March.

France international Nasri was replaced by James Milner in the 79th minute and required several minutes of treatment before leaving in tears on a stretcher with his left leg in a brace.

"It should have been a red card," said Pellegrini. "But I think it's very difficult for the referee to handle a game when every time he gave a decision against Newcastle there were complaints from the manager."

Newcastle manager Alan Pardew defended Yanga-Mbiwa's tackle. "He wouldn't have wanted to hurt Nasri. He is not like that and I hope Nasri is OK," he said.

Pellegrini confirmed Edin Dzeko, scorer of the opening goal, sustained a calf injury in the victory, which took City to the top of the Premier League.

Alvaro Negredo was also on the scoresheet, sealing victory over a Magpies side that saw Cheick Tiote's first-half goal ruled out for offside.