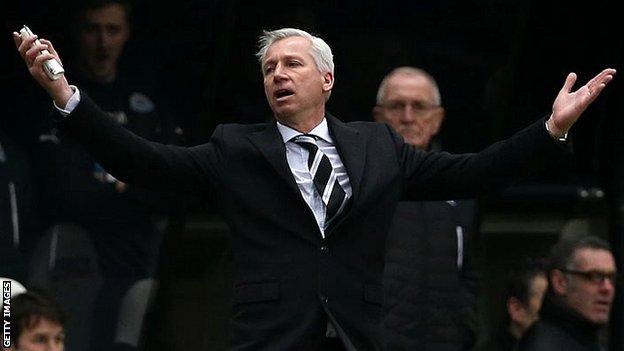 The incident occurred during Sunday's Premier League match at St James' Park, when Newcastle were trailing 1-0 and then had a goal disallowed for offside.

We felt a huge injustice over that goal

The Football Association said it had contacted the 52-year-old and "reminded him of his responsibilities".

Pardew was angry after referee Mike Jones ruled Yoan Gouffran was offside when a 30-yard shot from Cheick Tiote went into the net.

"It was a heat of the moment thing," said the Newcastle boss. "I have apologised and he has accepted that."

Pardew spoke to Jones after the match, but was not happy with the official's explanation.

"I don't think he was clear in his answers," said Pardew. "We felt a huge injustice over that goal. It is a great moment for this football club if that goes in.

Law 11 in the FA rulebook

"I have seen the referee and it is a really technical thing he is judging there. Tiote has hit a goal that Joe Hart is just not going to save. It goes through a number of bodies, but his vision is not impaired.

"The ball has gone on the inside of Gouffran and the City defenders are obstructing Joe Hart's vision as much as anyone."

Pellegrini claimed Pardew was "complaining about every decision".

Pardew was banned from the touchline for two games last season after pushing the assistant referee in his side's 2-1 win over Tottenham.

He also clashed with Arsenal manager Arsene Wenger in 2006 while in charge of West Ham.

Victory took Manchester City one point clear at the top of the Premier League, while Newcastle remain in eighth place.