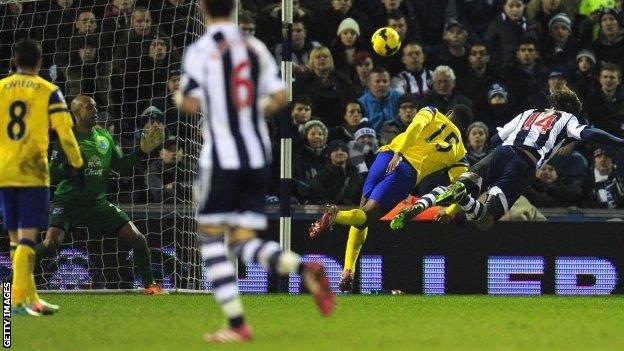 Everton missed the opportunity to move into the top four as Diego Lugano's second-half header ensured West Bromwich Albion boss Pepe Mel took a point from his first game at The Hawthorns.

Kevin Mirallas put Everton on course for the victory that would have moved them into the Champions League places just before half-time - but Roberto Martinez's side were punished for a poor second-half display by Lugano's fine header 15 minutes from time.

The point was more satisfying for Mel than Martinez, who will be desperately frustrated at Everton's failure to take first-half opportunities and the manner in which they deteriorated after the break.

The sign is described as an inverted Nazi salute and declared by some to be anti-Semitic and Zoopla, co-owned by Jewish businessman Alex Chesterman, will now focus on other marketing activities.

While the Football Association continues its investigation into Anelka, Mel selected the veteran and he was given warm applause when he was substituted late on.

New head coach Mel will not only take heart from a valuable point but also from The Baggies' determination to fight their way back into a game that Everton dominated early on.

Martinez's side, without the injured Ross Barkley, lacked a spark after the interval and he will know this could be two important points cast aside in the race for a top-four place as Everton remain sixth.

Romelu Lukaku was warmly received on his return to The Hawthorns, where he was such a success on loan from Chelsea last season, scoring 19 goals.

And he had the chance to add to his tally in this campaign early on when he ran on to Sylvain Distin's long pass but his attempted lob lacked direction and drifted harmlessly wide.

Everton reshuffled in the absence of injured Steven Pienaar, with Costa Rican Bryan Oviedo in an unfamiliar role on the right. He adapted well, though, and was twice narrowly off target as Martinez's side exerted pressure.

Seamus Coleman saw a goalbound shot blocked by Chris Brunt but there was also plenty for Albion's fans to appreciate as Mel's determination to impose a pressing game showed early signs of promise.

If Mel had a complaint, it would have been West Brom's reluctance to shoot when presented with opportunities, a failing which let them down on more than one occasion, although Zoltan Gera did force Everton keeper Tim Howard into one block.

Everton were looking the bigger threat and they finally transformed this into end product four minutes before half-time when Lukaku won an aerial challenge and Mirallas held off Lugano's challenge with ease to beat Ben Foster with a low drive.

Mel sent on former Everton striker Victor Anichebe as a half-time replacement for Matej Vydra and he almost punished his former club when he stole on to Anelka's cross at the near post but Howard was alert.

Everton had allowed their control to slip, with passages of sloppy play which allowed Albion to gain a foothold and the equaliser duly came with 15 minutes left.

Lugano's near-post run was rewarded with a flashing cross from James Morrison, with the Uruguayan giving Howard no chance with a bullet header.

The momentum had now shifted to West Brom and Martinez introduced Aiden McGeady for his debut at the expense of Oviedo, while John Stones replaced Seamus Coleman, who went off feeling his hamstring.

Everton thought they had snatched the win when Distin turned in Gareth Barry's shot with the final kick of the game - but he was well offside and Albion survived.

"For me it was very good. The first half the team - we were too open but the second half we were compact.

"Everton is a team that is very, very strong. Tonight is a difficult match for me and my team.

"It's only the first week. I need to work. I need my players but the players are angry. For me, that's important.

"I need one more striker. But I have Nicolas Anelka, Matej Vydra, Victor Anichebe - I'm happy."

"The hardest thing was to get in front and score that goal. A couple of times we got good combinations and got into good places in front of goal.

"In the second half we didn't control the game in the way we wanted.

"Today was important. We knew that West Brom were going to try and stop us from playing and we wanted to put Kevin Mirallas in acres of space and I thought we got that.

"Every time we got a forward pass he was a real threat. West Brom are a team that will always try to press up and have a high line."