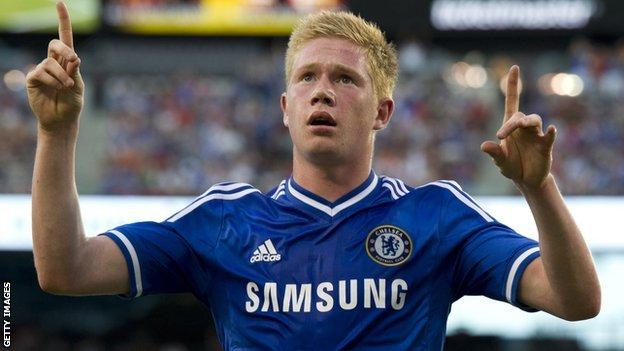 The midfielder, who spent last season on loan at Werder Bremen, has started just five matches since joining Chelsea from Genk in 2012.

The 22-year-old has signed a five-year deal with Wolfsburg, who are fifth in the Bundesliga.

Kevin de Bruyne's mother was born in Ealing, west London, making him eligible to play for England. However, he opted for the country of his birth, making his debut for Belgium in August 2010 while still a teenager.

"Chelsea thanks Kevin for his service and wishes him well at his new club," said a Blues statement.

De Bruyne scored 10 goals in 34 appearances for Bremen in the Bundesliga last season.

Reports in Germany claim Wolfsburg are paying around £16.7m, although neither club has confirmed the fee.

Blues boss Jose Mourinho walked out of a news conference earlier this season after being irritated by questions about De Bruyne.

"It was clear from the start that Wolfsburg would be the first team I talk to if Chelsea gave me permission," De Bruyne told the Wolfsburgh website.

"That's why I'm very happy that this transfer has been completed.

"I want to play my part, make sure we continue to be successful, and return to the international stage."