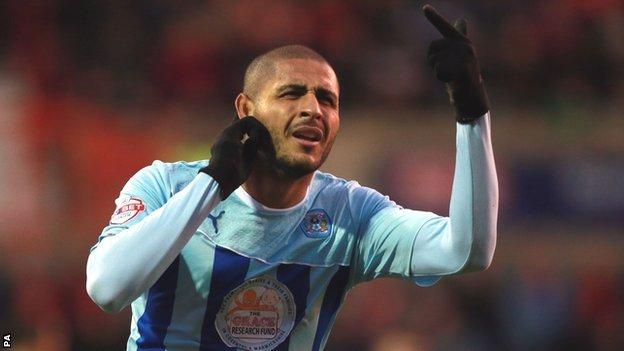 The 28-year-old striker, signed from Charlton Athletic a year ago, has 18 months left on his contract.

But, after 27 goals in a calendar year for the Sky Blues in 2013, he has been linked with moves to Brighton, Barnsley and home town club Wolves, where he started his career a decade ago.

With a year and a half left on his contract, we are in a position where we will only let Leon Clarke leave if the deal is right for Coventry City

"There had been indications over the weekend that this would happen but I was only formally notified on Monday morning after he arrived at the training ground.

"It's deeply disappointing when a player expresses a desire to leave the club in this way, especially when he has become such a firm favourite with supporters because of performances over the past 12 months."

Clarke, who is League One's top scorer this season with 15, with a further three in cup competitions, has maintained the run of goals that began when he arrived from Charlton on a two-and-a half-year contract last January.

"With a year and a half left on his contract, we are in a position where we will only let him leave if the deal is right for Coventry City," added Waggott.

"That means securing the kind of deal that will allow Steven Pressley to strengthen his squad should Leon go."

Clarke has proved something of a late developer since Mick McCarthy allowed him to leave Molineux for Sheffield Wednesday for a nominal fee in January 2007.

In a career that has already run up 14 clubs, over half his career tally of 94 goals have come over the last three seasons with Chesterfield, Scunthorpe United and now Coventry, where he has proved at his most prolific.

He began the new year as he had ended the old one, scoring Coventry's last-minute FA Cup third round winner at Barnsley last weekend. But he was not in the Sky Blues side that shipped two late goals to be held 2-2 at home by Crawley at Sixfields on Sunday.