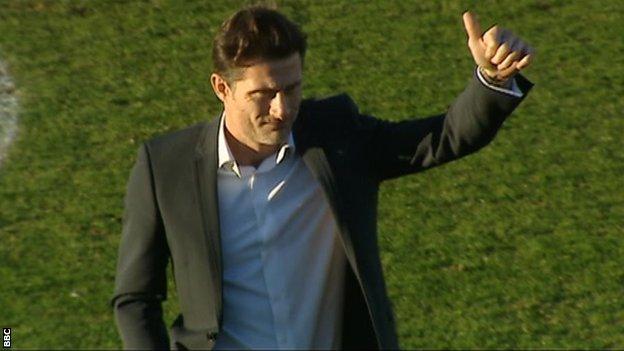 New Torquay boss Chris Hargreaves says his team's display in his first game in charge is the standard they need to maintain for the rest of the season.

The Gulls beat AFC Wimbledon 2-0 to give Hargreaves a winning start.

"I'm really proud of the players' performance, I thought they were excellent," he told BBC Radio Devon.

"That's the standard they've set. I put a note on the board before the game saying 'set your marker for me' and I couldn't have asked for any more."

Despite the victory, Torquay remain in the League Two relegation zone because of their inferior goal difference to Accrington and Bristol Rovers.

But Hargreaves' first game in management saw a marked upturn in Torquay's level of performance and the former Gulls skipper said the whole squad - including those not on the pitch at Kingsmeadow - had helped to raise spirits at the club.

We need people who are up for the fight

"They've set that marker for work-rate, fight, belief, courage to get on the ball: all the things that are going to help us," he said.

"It's still a massive job, let's not underestimate that - but we've given ourselves a chance with this first game.

"We had a plan and we stuck to it and it worked. There were some magnificent performances and great character from the dressing room from those playing and those not playing, who were so supportive.

"We wanted to make a statement of intent in terms of our work-rate and show that we want to fight and I'm very, very proud of the players and pleased for the fans."

"Having played with him I know what he's all about, he wants us to reflect that on the pitch and I think we did that.

"He wants to get across the idea that it's a whole unit and a together unit, after the game the boys who hadn't played were in there and it was like they'd won as well.

"We've got to continue to do that every week and if we can do that we'll get out of trouble. We need people who are up for the fight - that's the only way we're going to get out of it."