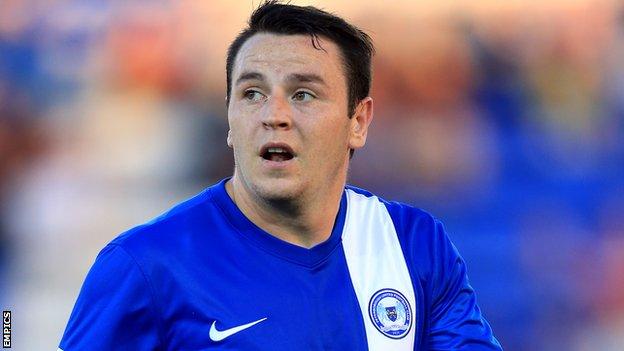 Peterborough United boss Darren Ferguson has warned forward Lee Tomlin that he cannot engineer a move away from London Road.

The 25-year-old, who had hoped to leave in the summer, received his second red card of the season at the weekend.

"I'll go the other way with it and he won't be going anywhere."

Tomlin was shown a second yellow card in the latter stages of for shoving Yaser Kasim.

The former Rushden attacker has been a star performer for Ferguson since joining Posh in 2010, but his discipline has often been a concern, with five red cards during his Peterborough spell and seven in his career.

Despite his desire to leave London Road in pre-season, Posh rejected just before the summer transfer window closed.

"He owes me massively now and his team-mates, because you can't do that," Ferguson said of Tomlin's latest dismissal.

"Whether the linesman has seen it or not, it's a poor error of judgement.

"I just asked him what he was thinking and I don't think even he knows."

A touchline fracas between both sides late on in the game culminated with Peterborough goalkeeping coach Jimmy Walker being sent to the stands.

"There were a lot of people getting involved in nothing. There were no punches thrown," said Ferguson.

Defeat by the Robins extended Posh's losing run in League One to four games, leaving them sixth and 15 points adrift of an automatic promotion place.

"There's a big gap between us and where we want to be. It's going to be really difficult to make that up," said the Peterborough boss.

"I'm very confident we will still get promoted from the league."