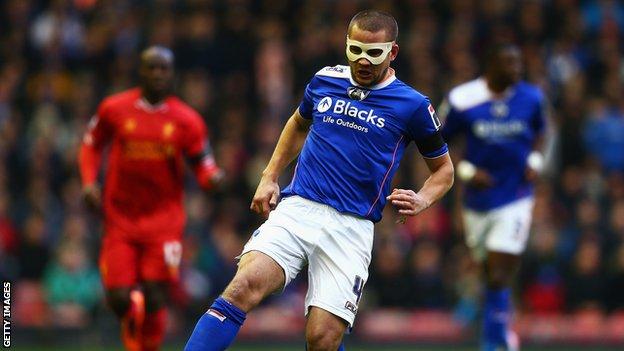 Oldham manager Lee Johnson has praised midfielder James Wesolowski, who is playing with a fractured cheekbone.

Wesolowski was hurt at Mansfield in December, but returned in the on 5 January.

Wearing in a protective mask, the 26-year-old scored in a on Saturday.

Johnson told BBC Radio Manchester: "He's a real winner. The thing I've been most impressed with is how much he's improved technically."

Wesolowski missed four matches because of the injury, but his manager was eager to have him back at the earliest opportunity.

"You ask the player and the welfare of the player is the most important thing for me, but I really wanted him to play last week [at Liverpool] because he deserved it," added 32-year-old Johnson.

"He's been excellent week in, week out. You want to give players like that the opportunity to play at Anfield. It's healing well and, every day that goes by, he's getting stronger and stronger."

Meanwhile, goalkeeper Paul Rachubka has extended his stay at Boundary Park until the end of the season.

Rachubka, 32, on a short-term deal in September and has made three appearances, all in the Football League Trophy.