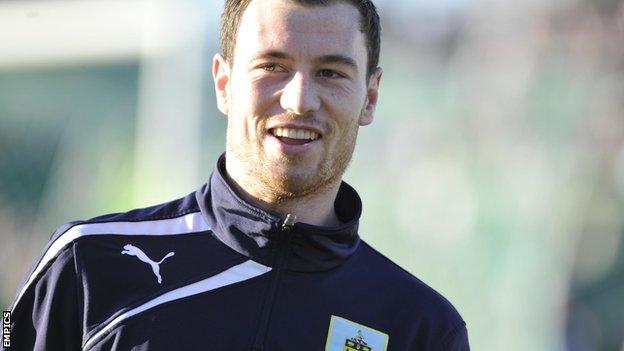 New Burnley striker Ashley Barnes is confident the club can win promotion from the Championship this season.

The 24-year-old arrived from Brighton on Friday for an undisclosed fee on a three-and-a-half-year contract.

He made a brief appearance as a substitute in Saturday's 2-1 away win over Yeovil Town at Huish Park.

When asked by BBC Radio Lancashire if the team can reach the Premier League, Barnes replied: "Definitely, that is the aim. We need to push on."

He accepted he faces a challenge to earn a place in the starting line-up, with Danny Ings and Sam Vokes in superb form for the second-placed Clarets.

The gaffer stuck by me, I was the target he wanted and I am here. You want to be somewhere where someone wants you

They were both on target against Yeovil and have now netted 27 goals between them this campaign.

"I am happy to sit on the bench, no complaints," said Barnes. "The lads have been fantastic, but I am happy to be the third man and play a part whenever I can.

"I am here to push them on and help them to score more goals. The two [Ings and Vokes] are working so well together and I can be the third one to help them both."

Bath-born Barnes paid tribute to boss Sean Dyche, who first tried to sign him in the last transfer window.

"It nearly happened in the summer, but I it wasn't to be," he added.

"The gaffer stuck by me, I was the target he wanted and I am here. You want to be somewhere where someone wants you.

"Everything about the place, it sold itself. They have been in the Premier League before so know what is it all about. I want to help them get back there."