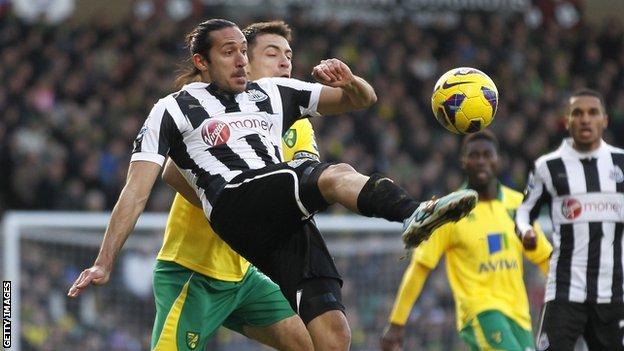 The £3m-rated Argentine, 30, wrote on Twitter at the weekend that he would be leaving St James' Park imminently.

Gutierrez was a key man in the Magpies squad that Chris Hughton, now Canaries manager, led to promotion from the Championship in 2010.

Man in the mask

Gutierrez has celebrated scoring goals by wearing a Spiderman mask. It relates to a cinema trip during his time at Real Mallorca, when a boy asked if Gutierrez could score for him and the Argentine said he would put a Spiderman mask on if he did so as that was the boy's favourite film.

Hughton said: "Jonas can play on either flank and in a central position, so he's a very welcome addition."

Gutierrez, who has played just twice for Newcastle this season, said: "I'm happy to be here. It's an opportunity for me to get back in the game and try and do my best for the team."

The former Velez Sarsfield player has made 163 league appearances for the Magpies since he joined from Mallorca in July 2008, scoring 10 goals.

"He's somebody that will certainly bring experience - he's played close to 200 games for Newcastle so he knows the Premier League very well," said Hughton.

"He's been in England for five years, so there won't be that settling-in period that you would have with some other players. That's important, particularly in January when you need players that can go straight into the squad."