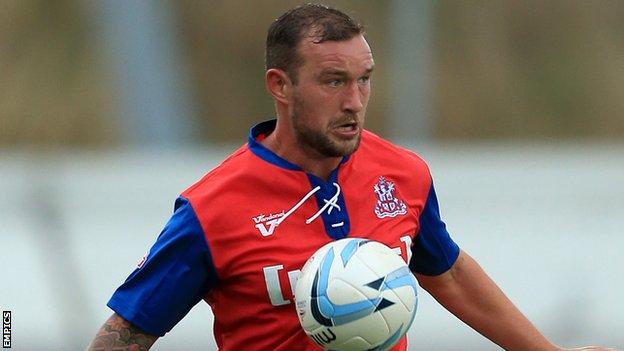 Gillingham striker Danny Kedwell says he may well have an operation on a hernia problem he has been carrying.

The 30-year-old was due to have surgery, which would sideline him for up to a month, earlier in January but the operation was put off.

"In the last 10 minutes on Saturday [at Colchester] I did actually feel it. It's the first time I have," he said.

"I've got to speak to the physio and see where I go. It started to really hurt so I'll see what he thinks."

Kedwell, who has scored 10 goals in 28 appearances for the Kent club this season, has played the full 90 minutes in each of Gillingham's last three games.

It is about keeping the club in this division. I need to make sure I am 100% fit

"I don't [usually] feel it during games, it's afterwards," he told BBC Radio Kent.

"I get through it and I've been training as well so it isn't like I've been missing training. It does take its toll.

"If it is still hurting I think I should go and get it done as I am not 100% to be playing. It is not fair on the players, the manager [Peter Taylor] and the fans."

With the Gills currently five points above the League One relegation zone, Kedwell is eager to play on but is wary of doing more damage to the injury.

"That's me as well - I don't want to miss any games," he said. "That is why I told them to cancel it as I want to carry on playing.

"I was enjoying my football but sometimes that is the worst way to do it.

"It is about keeping the club in this division. I need to make sure I am 100% fit for the club and the boys."