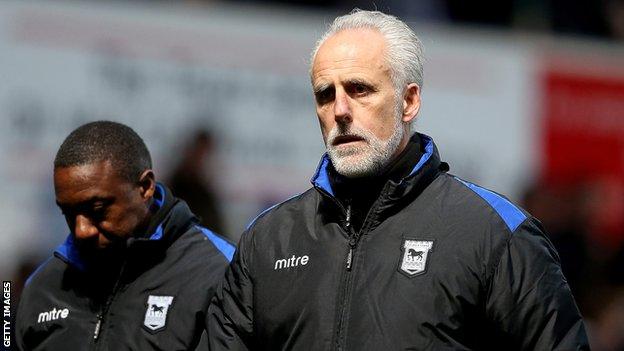 Ipswich boss Mick McCarthy has said he will be interested to see whether new Financial Fair Play rules are enforced.

Football League clubs must adhere to a structure of spending from this season, or face a transfer embargo.

"I think we were one of the clubs that voted against it. But if it's coming in then we should stick to it," McCarthy told BBC Radio Suffolk.

"I'll be interested to see all the fines given out for people that break the rules and if they get implemented."

From this season, Championship sides must operate with losses of less than £3m, or up to £8m if the club's owner can plug the £5m shortfall.

Teams' accounts will be assessed on the 1 December 2014 and side's failing to meet the targets will be subject to a transfer embargo.

Town's most recent accounts, released in April, showed they made and the total debt to owner Marcus Evans rose to £72m.

That means McCarthy is most likely to make loan signings to strengthen his play-off-chasing side this January in an attempt to continue to reduce costs.

"I understand the gig and the parameters of Financial Fair Play. We're sticking to it," said McCarthy.

"I'm happy with the lads we've got. We've got a great set of blokes.

"Some of them won't play Tuesday night [in the FA Cup replay against Preston]. But it could mean they can play in the next 10 games and that's vital for us."