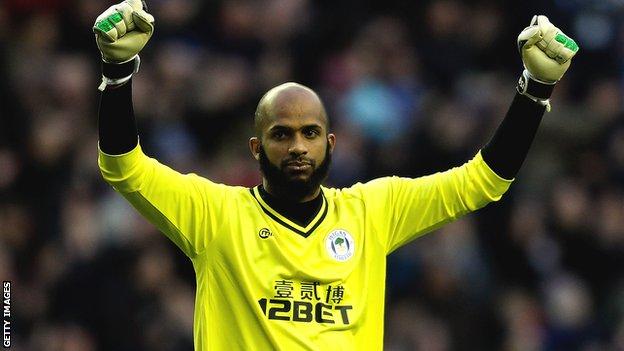 Ali Al-Habsi says it is a coincidence that his return to the Wigan team has seen the Latics put together their best run of form this season.

The Oman international goalkeeper, 32, came back to the starting line-up on 21 December after undergoing surgery to cure a shoulder problem in the summer.

Since his return, Wigan have won three and drawn three in all competitions.

"It's a great time to come into the team. We're performing so well and the results are coming our way," he said.

extended the club's unbeaten run to seven matches and moved Uwe Rosler's side up to 10th in the Championship, with Al-Habsi having kept clean sheets in all but one of the games since his comeback.

"You can see the team is showing different football now," continued Al-Habsi. "We can play, we can press, we can score and everyone's confident.

"We know it's not an easy league. We're not far from the play-offs. We're getting points at the right time and we need to continue."

Wigan's next outing will see them continue their defence of the FA Cup with a third-round replay at MK Dons on Tuesday, having in the initial tie at the DW Stadium.

"It's a cup game so it's a different game," Al-Habsi, who did not play in the at Wembley, told BBC Radio Manchester.

"We have to go there fully concentrated, we'll try to keep another clean sheet and win the game to go through to the next round."

A home tie with Premier League strugglers Crystal Palace awaits the winners in round four.