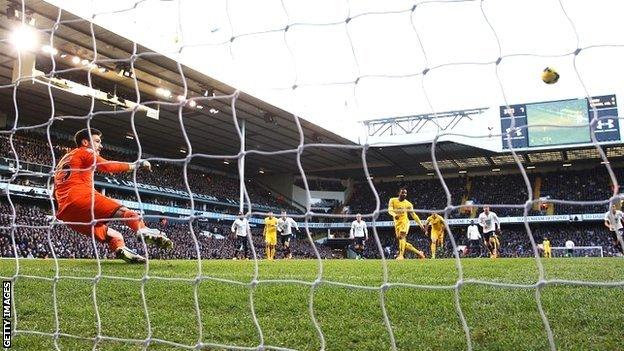 Neil Warnock has rejected comments made by Crystal Palace's Jason Puncheon that questioned his integrity.

Puncheon, who played under manager Warnock while on loan at QPR, tweeted the claims about the 65-year-old while responding to criticism of his penalty miss in the 2-0 defeat by Tottenham.

The Football Association is looking into the winger's comments.

"If it's been suggested I have done anything untoward, I can confirm I most certainly haven't," Warnock said.

"The matter is being addressed with him directly on my behalf."

Puncheon has been widely criticised for a first-half penalty which he blasted high and wide, during the defeat at White Hart Lane but took particular exception to comments made by Warnock in his role as a pundit on Talksport.

The 27-year-old, on loan from Southampton, posted several Tweets, which he has since deleted, in which he accepted "banter and opinions" over his miss.

He wrote: "As a man I will live with that, which is fine, but I will not live with [Warnock's] opinion."

Warnock, who was sacked by QPR in November 2012, told BBC Sport: "I've been made aware of the comments. The first tweet I have no problem with - he is entitled to his opinion.

"Moving on from there in his later tweets, he has made comments which I know nothing about."

Asked if the FA would examine Puncheon's comments, a spokesman said: "We are looking into it."

The penalty miss came in the opening 10 minutes at White Hart Lane with the game still goalless, and Warnock said: "There's no way I would've trusted him with a penalty. You've got to have somebody a little bit more cool, and he's not like that, Jason.

"He can whack a 35-yard free-kick in here and there but a penalty, with all the pressure on him at a place like White Hart Lane - not in a million years for me.

"I think a centre-half might have done a bit better! Obviously, he never meant to put it up there."

The defeat saw Palace slip to the bottom of the Premier League.