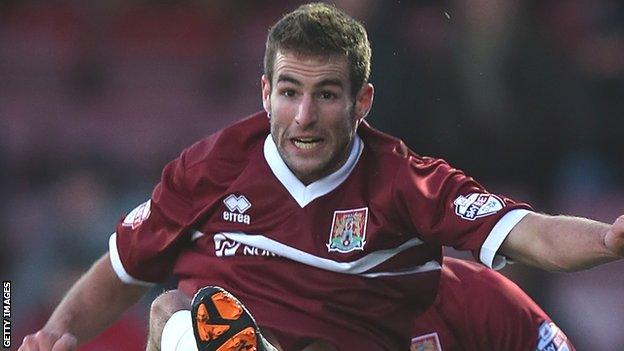 The 23-year-old made his debut on loan from Fleetwood in the 2-0 defeat by York City, a result King has admitted will not help his chances of getting the full-time job.

Blair told BBC Radio Northampton: "They have brought me in because they think I'm good enough to help them out.

"I've got to repay them with that. Hopefully I can help him out."

I'm fuming with myself. On your debut, you want to make a good impression

He added: "Andy has given me confidence to come here and play and be a part of this.

"I've got to give it my all and hopefully if I do well, that means the team are doing well, and then the manager's doing well."

Blair was frustrated with himself for a missed header in the defeat at Sixfields, when the score was 0-0.

"I'm fuming with myself. On your debut, you want to make a good impression. I was scrambling a little bit and didn't react quickly enough."

But the former Kidderminster and York wideman says he has been impressed by the spirit amongst the players at Northampton, despite the club being bottom of League Two.

"I was really surprised how good the spirit was," he said. "That's going to be massive, if we can keep that up."