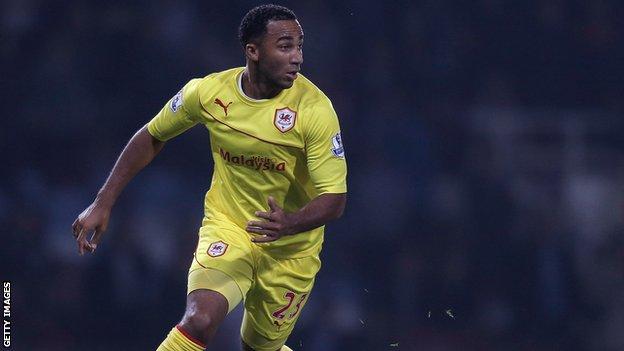 "He is coming off the back of a bad injury. He's been fit now for a while [and] is ready to go," Rosler said.

Maynard's injury limited him to four appearances for Cardiff last season as the Welsh club won the Championship title. A further 10 outings have followed in 2013-14, with his only goal this term coming in the League Cup second round at Accrington in August.

Maynard did not feature in either of Ole Gunnar Solskjaer's first two games as Cardiff boss, with Peter Odemwingie, Fraizer Campbell and Andreas Cornelius all selected ahead of him.

Despite this lack of action, Rosler said he was convinced the former Crewe and Bristol City striker would be an asset to to his team.

"I think he matches our ambitions because we have to prove a point that we want to go into the play-offs and win promotion this year. To get such a hungry player at this stage of the season with such a proven goal record is a very good move."

And Rosler added: "The deal is not done. He has a medical - but we do not expect a problem."

Maynard will challenge players such as Marc-Antoine Fortune and Manchester United loanee Nick Powell for a starting spot up front if he makes the switch.

FA Cup holders for an undisclosed fee on Monday. They are unbeaten in six Championship games, and sit 10th in the table - three points off the final play-off spot and with a game in hand on their closest rivals.