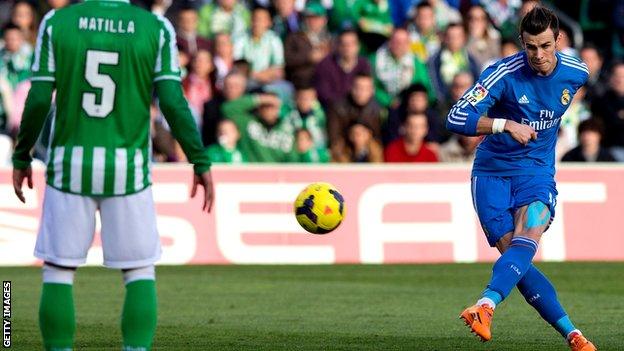 Gareth Bale scored for the first time in almost two months as Real Madrid moved level with leaders Barcelona and Atletico Madrid at the top of La Liga.

Bale, who had last netted against Valladolid on 30 November, curled in a superb free-kick before Karim Benzema scored his 100th goal for Madrid.

Ancelotti has guided Real Madrid to a 18-game unbeaten run in all competitions since a 2-1 defeat at Barcelona on 26 October.

Carlo Ancelotti's side knew a victory would put pressure on top two Barca and Atletico, who play Levante and Sevilla respectively on Sunday.

And they responded with a dynamic performance against a Betis side who offered little resistance.

Portugal captain Ronaldo, who also scored in Wednesday's Copa del Rey win at Osasuna, celebrated being named as the world's best player by blasting in his 21st goal of the season from long range.

Betis keeper Stephan Andersen did not even move and was beaten easily again shortly after by Bale's pinpoint set-piece.

The Welshman, who moved to the Bernabeu in an £85m world-record transfer, has drawn criticism in recent weeks after failing to hit top form following a calf injury.

Gareth Bale and Cristiano Ronaldo are the only La Liga players to score more than one free-kick this season. Bale has scored two from four attempts, with Ronaldo netting twice from 20 attempts.

And the 24-year-old's relief was clearly evident as he was mobbed by his team-mates in celebration of his 10th goal for Los Blancos.

France striker Benzema blasted inside the post, following great build-up play from Luka Modric, shortly before half-time to rack up his century in all competitions since joining from Lyon in 2009.

After the break, the away side continued to press and scored their fourth when Argentina winger Di Maria thumped a low drive into the bottom corner.

Substitute Morata, who Ancelotti reiterated on Friday would not be leaving the Bernabeu after being linked with Premier League side Arsenal, clipped in from close range in the final minute.

Shots on Target
Home1
Away11