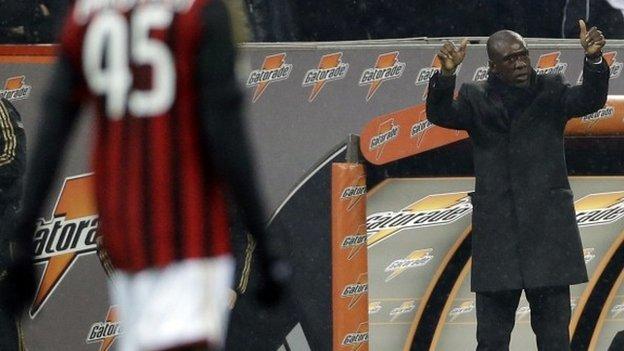 Clarence Seedorf made a winning start as AC Milan coach on Sunday thanks to Mario Balotelli's late penalty against Serie A rivals Verona.

The striker fired in the only goal of the game in the 82nd minute after Alejandro Gonzalez had fouled Kaka.

Despite the victory, the 18-time champions remain 11th in the table following a week that saw Seedorf replace sacked Massimiliano Allegri.

Milan, who finished third last season, play Cagliari next Sunday in Serie A.

Seedorf, 37, who spent 10 years as a player at Milan, watched his new side create very few clear-cut chances in a dull encounter.

The San Siro crowd had to wait 38 minutes for the first decent opportunity, when Balotelli cut inside and fired in a powerful low shot that was well saved by Verona goalkeeper Rafael.

Robinho had the best chance prior to the goal, when his strike from the edge of the area took a huge deflection before bouncing off Rafael's right-hand upright.

Verona's Martinho tested Christian Abbiati, who had little to do in the match, with a firm drive before Balotelli finally broke the deadlock at the other end.

Kaka raced down the left side of the area and appeared to be no threat to Verona's goal, but nevertheless was scythed down by Gonzalez.

Balotelli took charge of the spot-kick and side-footed in to give Seedorf the perfect start to his managerial career.