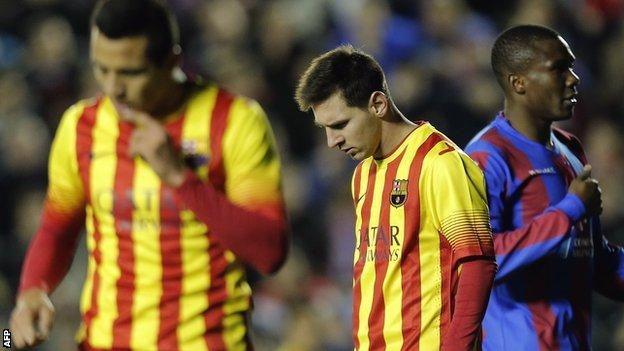 Spanish champions Barcelona remain top of La Liga despite being held to a frustrating draw by stubborn Levante.

The home side, who were thumped 7-0 at the Nou Camp in August, led through defender Loukas Vyntra's early header.

Barcelona, who drew 0-0 at title rivals Atletico Madrid last weekend, have now gone two La Liga games in a row without a win - for the first time since May 2011.

Lionel Messi made his first La Liga start in two months following a hamstring injury, but could not inspire a winner for the visitors.

However, the Catalans remain ahead of Atletico Madrid on goal difference after they were unable to take advantage by beating Sevilla later on Sunday.

Both sides are now only one point ahead of third-placed Real Madrid, who eased to a 5-0 victory at Real Betis on Saturday.

Mid-table Levante were embarrassed by the Catalans on the opening weekend of the season, but produced a gutsy display against their illustrious visitors that was a stark contrast to their limp performance in Barcelona.

Barca boss Tata Martino insisted in the build up to Sunday's return game that the Valencia side would be a different proposition on their own patch - and so it proved.

Joaquin Caparros's side defended stoutly in numbers as they blunted a Barcelona attack including Messi, who started a league match for the first time since limping off at Real Betis on 10 November.

The Ballon d'Or runner-up netted twice but was almost anonymous in the first half before exerting more influence after the break.

The Argentine's clearest sight of the home goal came in a frantic second-half spell where he was twice denied from point-blank range by Levante keeper Keylor Navas, with veteran defender Juanfran clearing off the line from Xavi in-between.

The hosts had to stand firm against long periods of pressure throughout as Barcelona probed for a vital lead. Xavi firing a low shot wide shortly after Pique's opener, while Juanfran and Navas also came to the rescue to block further efforts from Messi and substitute Cristian Tello in the closing stages.

But Levante were not content to simply contain the visitors, instead causing problems of their own as they looked to pin Barca back with their neat attacking play.

Until Sunday's draw at Levante, Barcelona had won the 17 previous matches in which Gerard Pique had scored.

The 11th-place side failed to win against any of the teams above them before the mid-season winter break and spurned late chances to end that unwanted record against the Catalans.

However, they will be more than happy with the deserved point earned by Vyntra's first goal in Spanish football. The Greece international put the home side ahead when he escaped marker Cesc Fabregas at Ivanschitz's corner to power an angled header past Valdes.

Within eight minutes Spain defender Pique climbed above the home defence to powerfully nod in Xavi's left-wing corner for the equaliser.

However, it was not enough as Barca dropped points for only the fourth time in 20 La Liga matches this season.