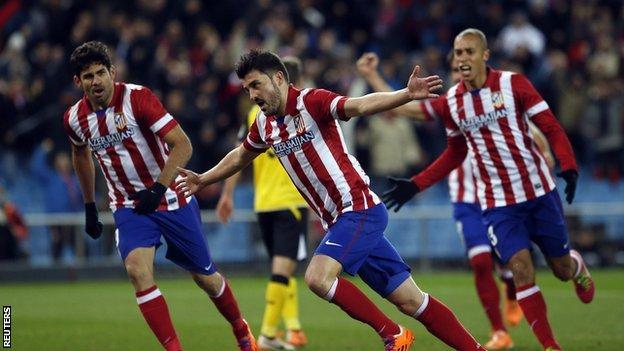 Atletico Madrid missed the opportunity to go top of La Liga as visitors Sevilla earned a deserved point at the Vicente Calderon.

Diego Simeone's side knew they could go two points clear of Barcelona and led through David Villa's low strike.

But they were pegged back when Sevilla, who ended with 10 men after Alberto Moreno's late red card, levelled through skipper Ivan Rakitic's penalty.

Atletico stay second behind Barca, who drew at Levante, on goal difference.

Third-placed Real Madrid, who cruised to a 5-0 win at Real Betis on Saturday, are now only one point behind the pair after trailing by five going into last month's winter break.

Carlo Ancelotti's side are the biggest winners on the first weekend since the turn of the Spanish season after watching both of their title rivals unexpectedly slip-up.

Ahead of kick-off at Atletico's game, there was a sense of expectation among a noisy home crowd buoyed by the news filtering through from Levante that Barcelona had dropped points.

And the party atmosphere continued as their team profited from a high-tempo start with Villa's opener.

The Spain striker, who joined Atletico from Barcelona in the summer, smashed through a crowded penalty area after Sevilla keeper Beto failed to punch clear home skipper Gabi's right-wing cross.

But the mood of Atletico darkened - particularly that of coach Simeone, who became increasingly animated on the touchline - after defender Juanfran was rightly punished for tugging Sevilla striker Carlos Bacca's shirt inside the penalty area.

Despite a long delay, Croatia international Rakitic kept his nerve to fire into the left corner above Atletico keeper Thibaut Courtois's despairing dive.

Sevilla midfielder Moreno was shown a straight red card after tangling with Gabi in the dying moments, but Atletico could not make their numerical advantage count.