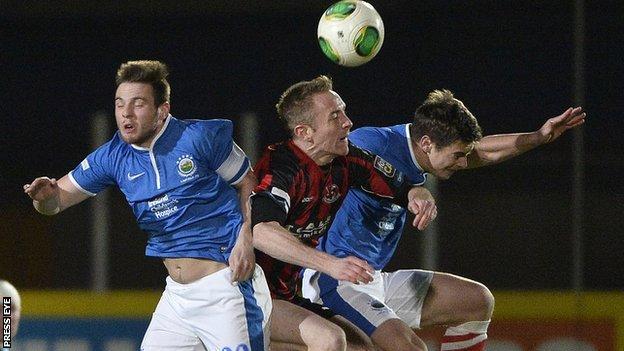 Linfield aim to secure their first win of the season over Crusaders when the sides meet at Windsor Park on Tuesday.

The Blues have drawn one and lost one against the Crues in the league, and were also defeated in a penalty shoot-out in the League Cup quarter-finals.

Indeed, the Premiership leaders have failed to register a victory over their Belfast rivals in nine meetings.

"We have got ourselves in a decent position but it's extremely tight," said Linfield manager David Jeffrey.

"This is a mouthwatering game but it is one we will relish," he added.

"The Crues were very impressive against Dungannon in their last league game so this will be a test of how far we have progressed.

"I was bitterly disappointed by our performance at Seaview earlier in the season as I thought we didn't put up a fight at all and deservedly lost 2-0.

"We then drew 0-0 at Windsor Park and although we lost in a penalty shoot-out in the League Cup, I was much happier with our display and on another night we could have won."

The third-placed Crues are six points behind the league leaders ahead of the stand-out game of Tuesday evening's full programme of Premiership action.

Michael McNamee is joined by Tony Gorman at Windsor Park as he presents coverage of Tuesday night's full programme of Irish Premiership action on a Sportsound Special on BBC Radio Ulster medium wave and the BBC Sport website from 19:30 GMT.

Joel Taggart and Chris Morgan provide commentary on the stand-out game of the evening as leaders Linfield face Crusaders.

The programme will have reporters at the other five games, including Cliftonville's match against Ards, Glenavon against Glentoran and the basement battle between Coleraine and Warrenpoint Town.

Crusaders manager Stephen Baxter is set to welcome back several first-team regulars who were rested for the Irish Cup victory over Crumlin Star with this crunch match in mind.

Skipper Colin Coates will feature after being told that he will not require surgery on ankle problem, good news for the north Belfast outfit ahead of the remainder of the campaign.

"I've been happy with the team this year - they have showed a lot of hunger and desire and have reached two cup finals - this is another huge occasion for us," said Baxter.

Second-placed Cliftonville travel to Clandeboye Park to face Ards, with Reds manager Tommy Breslin promising to "freshen things up after a tired performance" in his team's Irish Cup draw with Coleraine.

"We didn't look at our sharpest on Saturday, and perhaps the heavy schedule of fixtures is taking its toll," argued Breslin.

"We have a number of players who did not feature in that game, or came on as substitutes, so we will try to address any tiredness and be at our best against a team who are fighting for their lives."

Meanwhile Glenavon have new signing Tiarnan Mulvenna available for their game against Glentoran at Mourneview Park after the striker's international clearance came through.

The Lurgan Blues saw off interest from a number of other clubs to secure the services of the 25-year-old former Dundalk and Drogheda forward on an 18-month deal.

Defender Brendan Shannon is set to make his first league appearance for some time after spending most of the past 18 months on the sidelines through injury.

Coleraine manager Oran Kearney emphasises that his side are "absolutely determined to alter their league position" as they prepare to take on fellow strugglers Warrenpoint Town at Ballycastle Road.

The Bannsiders must plan without Stephen Dooley, who returns to the United States after scoring two goals in two games while on a short-term contract, plus Connecticut-bound Stephen Carson.

New Ballymena United recruits Jim Ervin and Darren Boyce both made an impact after coming off the bench in the fifth round cup tie with Harland and Wolff Welders, so the duo could be in line for starting berths at Dungannon Swifts.

Ex-Sky Blues forward Gary Liggett is likely to face his former team at Stangmore Park after scoring a double on his debut on Saturday.

Defender Chris Ramsey is suspended for Portadown's home match with goal-shy Ballinamallard United after being sent-off in the defeat by Glentoran at Shamrock Park on Saturday.