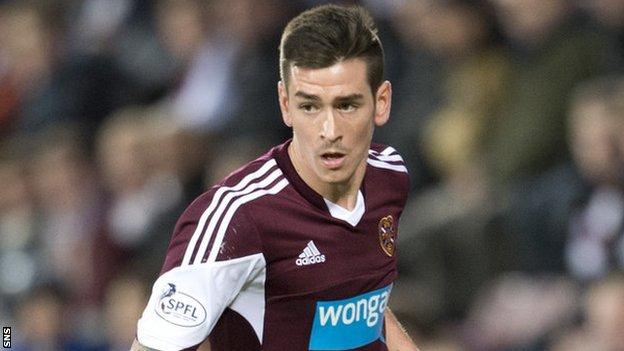 Hearts winger Jamie Walker has been ruled out for about 10 weeks with a broken foot.

The 20-year-old was hurt in the closing minutes of at Tynecastle.

Walker received the results of an X-ray on Monday afternoon and will undergo surgery on Thursday.

Hearts manager Gary Locke told his club website: and now we know for sure."

The loss of one of their top performers this season is a further blow for a side sitting at the foot of the Scottish Premiership, who are unable to add to their squad because of a signing embargo for being in administration.

Administrator BDO is and will hope the lengthening injury list will enhance its case.

Walker's fellow midfielder Jason Holt has been out of action since November with a similar injury to the Scotland Under-21 player, captain Danny Wilson has missed the last three matches with a virus, while fellow defender Kevin McHattie failed to complete the full 90 minutes at the weekend.

Midfielder Callum Tapping was only fit enough for a place on the bench against Motherwell after suffering with a stomach bug and goalkeeper Mark Ridgers has just returned to training following a knee operation.

"It's just another blow for us, which we'll need to take on the chin," Locke added.

"It gives an opportunity to someone else, but our options are becoming fewer. We have a few out through injury and illness and Jamie's another one to add to that list.

"He's had a scan and he'll have surgery later this week. It's the same type of injury which Jason Holt has.

"It's a massive blow as he's been one of the players giving us a goal threat this season."