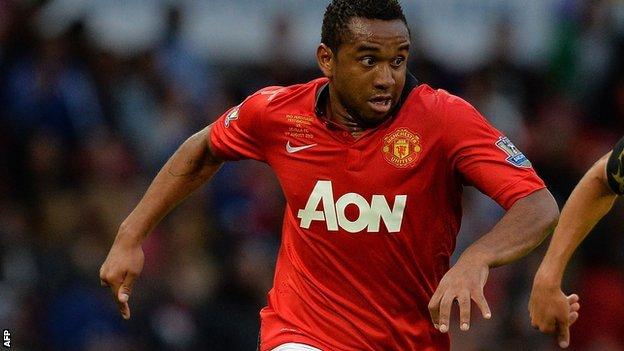 Manchester United midfielder Anderson has joined Italian side Fiorentina on loan after passing a medical.

Fiorentina put a photograph on Twitter of the Brazilian, who has made 177 appearances for United since joining from Porto in 2007, being examined.

"We've not been able to get him as many games as he'd hoped, or we hoped we might get him," said Moyes.

Anderson's departure will be mourned by few at Manchester United. The supply of patience waiting for the Brazilian to fulfil his potential had long run out. When he signed the teenager from Porto in 2007, Sir Alex Ferguson believed he had pulled off a real coup. Indeed United fought hard to secure his services after a work permit was initially rejected. In a time when United's midfield was crying out for someone to show the creation and class to make a place their own, Anderson never came close to being a regular. This said it all about an unfulfilling United career.

"We feel it's a good opportunity for him."

Anderson, who cost United a reported fee of about £20m, has only completed 90 minutes once since the start of last season, in the 5-5 draw at West Brom that ended the Reds' title-winning campaign in May.

His last appearance was in the 2-0 Capital One Cup win at Stoke City on 18 December.

Moyes is hoping to strengthen his squad in January, but admitted earlier this month he may struggle to do so because there are not many suitable players available to sign in the mid-season transfer window.

Midfielder Marouane Fellaini, who played under Moyes at former club Everton, was the only new senior arrival at United last summer.

Fiorentina, managed by Vincenzo Montella, are fourth in the Serie A table, 15 points behind leaders Juventus.